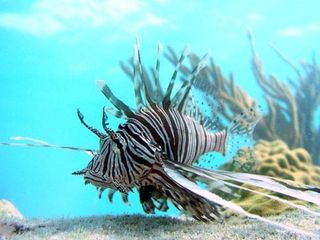 The lionfish poses another threat to the Caribbean ecosystem.
(Image: © Oregon State University)

A life spent swimming in the Caribbean sounds ideal, but good luck convincing the resident fish. Already confronted by overfishing, coral bleaching and increasing amounts of sediment, nitrates, and acid, they have one more enemy to add to this list: lionfish.

A new study out of Oregon State University, which will be published soon in the journal Marine Ecology Progress Series, found that it took five weeks for lionfish, like the one shown above, to slash juvenile fish populations by 79 percent. Researchers saw one large lionfish consume 20 small fish in 30 minutes.

With less herbivorous fish, the stage is set for seaweeds to potentially overwhelm the coral reefs and threaten the already delicate ecological balance.

The sharp spines of lionfish release a venom known to cause painful stings in humans. Some humans suffering from heart problems or allergies have died after being stung by a lionfish.

Unfortunately, no solutions for neutralizing invasive lionfish jump off the page. Rounding up the lionfish individually, while possibly effective in the local area, does not provide the broad solution required. And introducing predators could be promising, but groupers that prey on lionfish in the Pacific Ocean have been over-fished in the tropical Atlantic.

Fish native to the Pacific have learned that lionfish spells t-r-o-u-b-l-e, so they have adapted to avoid these aggressive carnivores. But in the Atlantic, the lionfish are the new kids on the block, so their reputation does not precede them.

Lionfish likely entered the Florida waters in the early 1990s compliments of local aquariums or fish hobbyists. They have ventured north as far as Rhode Island and now patrol much of the Caribbean.

Interestingly, one of the few lionfish predators roaming the warm Caribbean waters is another lionfish. They can consume other fish up to two-thirds their own length.

When on the prowl, the lionfish uses its large, fan-like fins to corral its next meal. Then, it consumes its prey with one rapid strike.

With their innate ability to defend themselves, lionfish are fearless of most marine life.