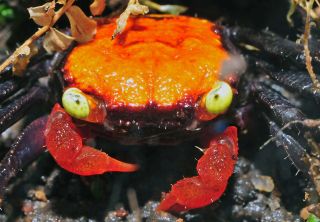 A vampire crab of the species Geosesarma hagen, which has an orange body.
(Image: © Oliver Mengedoht from Ng et al., 2015, Raffles Bulletin of Zoology)

The mystery of the origin of two strange-looking species of "vampire crabs" is finally solved. The crabs come from the island of Java in Indonesia, according to the scientists who officially describe the species in a new report.

Vampire crabs owe their name to their spooky appearance, as they have bright-yellow eyes contrasting sharply with purple or orange abdomens.

People in the aquarium trade have known of the two crab species described in the report for at least a decade, said Peter Ng, a biology professor at the National University of Singapore and an author of the report. Ng said he saw the crabs for the first time in aquaria in Singapore, where the crustaceans were being sold as pets.

The problem for scientists was that it was not clear where the crabs originally came from, which made it difficult for researchers to actually name and describe the traits of the species in the wild. [The 7 Weirdest Glow-in-the-Dark Creatures]

"For a species to be formally and properly described and named, its provenance should be known," Ng told Live Science. "Of course, it is perfectly legal to name a species without knowing where it comes from, but that would be bad science and irresponsible."

Crab dealers have pointed to a number of possible places of origin for the crabs, from Java to Krakatoa, Borneo, Sulawesi and even New Guinea. But all of those sites were suspicious, Ng said.

With a good deal of detective work, study coauthor Christian Lukhaup, a German carcinologist (crab expert), traced the crabs' origins from dealers in Germany all the way back to Java, Ng said. Lukhaup persuaded businessmen and traders to connect him to the people in Java who were actually collecting the crab. These collectors then passed specimens of the animals on to the researchers.

The two new species have been named Geosesarma dennerle and Geosesarma hagen. There are now 53 species of Geosesarma genus known to science, said Ng, who himself has named 20 of the species. He said he currently has another half a dozen or so newly collected Geosesarma species from Southeast Asia in his lab, and these species still need to be named and described.

"So there are more to come as we explore and discover them," he said.

But the two newly described species may already be under threat from potential over-collecting for the aquarium trade, the researchers said. "Any species that is over-exploited — be it for food, or as a pet — stands [to be] threatened," Ng said. "More so for a small freshwater crab like this, which has a relatively restricted range."

The researchers said they are also worried about "the potential loss of [the crabs'] pristine habitat," Ng said. If this habitat becomes polluted or changed by human activity, the crabs' populations may collapse, he said.

"The nightmare for biodiversity researchers is that we are always working against the clock — too many species to discover and too little time," Ng added.

The study was published online Jan. 16 in the journal Raffles Bulletin of Zoology.