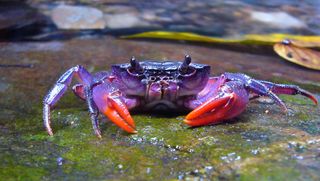 One of the newly discovered crab species, Insulamon palawanense, which is bright purple in color.
(Image: © © Senckenberg)

Four new species of crab that sport some wild colors have been discovered near the Philippine island of Palawan.

The newfound species are threatened by mining activities in the region, which is one of the world's major biodiversity hotspots, its discoverers said. About half of the species that live on Palawan are endemic, meaning they are found nowhere else.

Scientists at the Senckenberg Research Institute in Germany and De La Salle University in Manila found the four new species of Insulamon freshwater crab genus as part of their Aqua Palawana research program.

The reddish-purple crabs are the only varieties that are endemic to only one or a few islands; the sea keeps them from spreading further, as they depend on freshwater at all stages of their development. Having been completely separated from their relatives, they have developed their own separate species and genera over tens of thousands of years.

"We have proved that the only previously known type of Insulamon is restricted to the Calamian group of islands to the north of Palawan. The four newly discovered species live exclusively on the actual island of Palawan and make it a unique habitat," said study leader Hendrik Freitag of Senckenberg.

But the unique species are threatened by several mining projects that could damage or alter the crabs' habitat.

"The smaller the remaining natural habitat, the greater is the risk to endemic fauna and flora. Even minor environmental changes can lead to extinctions. It is all the more important to do research in this region and show that the biodiversity of these islands is unique and worth protecting," Freitag said in a statement.

The study describing the species was recently published in the journal Raffles Bulletin of Zoology.

This story was provided OurAmazingPlanet, a sister site to LiveScience.