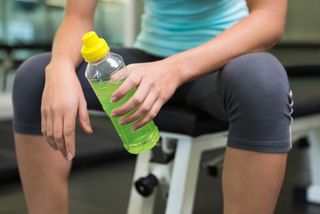 Energy drinks might give you some pep — but they might also be priming you for heart problems, a new study finds.

Researchers found that energy drinks can raise blood pressure to potentially unhealthy levels. The effect was far more prominent in young adults who did not consume caffeine regularly, according to the study, presented March 14 at an American College of Cardiology meeting in San Diego.

In this study, the research team — led by Dr. Anna Svatikova, a cardiovascular-diseases fellow at the Mayo Clinic in Rochester, Minnesota — gave a can of a commercially available energy drink to 25 healthy volunteers, whose ages ranged from 19 to 40. On a different day, the participants drank the same amount of a placebo drink. The researchers measured the participants' heart rate and blood pressure before and after the drinks.

The effect was most dramatic in people who did not typically consume more than a small cup of coffee or other caffeinated drink daily. In this so-called "caffeine-naive" group, the blood pressure increase was twice as high as the increase seen in the people who drank at least the equivalent of a cup of coffee on a daily basis, the researchers said in a statement.

Even a small increase in blood pressure can have deadly consequences, depending on your age and resting blood pressure, said Sachin Shah, an associate professor of pharmacy at the University of the Pacific in Stockton, California, who was not involved in the study.

"An acute, moderate increase in blood pressure is typically not a cause of worry in healthy subjects," said Shah, who has done research on the effects of energy drinks. However, in older people or those with hypertension, a moderate increase may be a cause for concern, he said.

At a population level, an increase of three or four points on a systolic blood pressure reading could mean a significant increase in deaths from stroke, he told Live Science.

Scientists do not know whether it is the caffeine, taurine or other ingredients found in energy drinks — or a combination of ingredients — that can adversely affect the heart.

In a separate study, presented last year at an American Heart Association meeting by Maj. Emily Fletcher of the David Grant Air Force Medical Center, healthy volunteers experienced a greater increase in blood pressure after they consumed an energy drink compared to after they drank a coffee drink that had an equal amount of caffeine. This result, Fletcher said, suggests that ingredients in the energy drink other than caffeine were conspiring to raise blood pressure.

According to the Mayo Clinic, consuming up to 400 milligrams of caffeine a day appears to be safe for most healthy adults. That's roughly the amount of caffeine in four cups of brewed coffee, 10 cans of cola or two "energy shot" drinks.

Previous studies have associated the consumption of energy drinks with poor memory and learning, anxiety, hallucinations, abnormal heart rhythm, substance abuse, and risk-taking behaviors. A study published in the journal Pediatrics in 2011 found that children, in particular, are at high risk of cardiac abnormalities from consuming energy drinks because of their smaller body size.