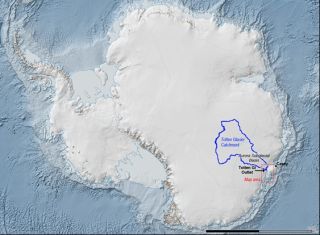 The Totten Glacier catchment basin (blue outline) is three-quarters the size of Texas and holds the ice and snow that flows through the glacier.
(Image: © Australian Antarctic Division)

A glacier the size of California in East Antarctica is in danger of melting away, which could lead to an extreme thaw increases sea levels by about 11.5 feet (3.5 meters) worldwide if the glacier vanishes, a new study finds.

As the ice shelf thins, the point where the glacier starts to float will retreat, raising the sea level, and exposing more ice to the ocean, said the study's lead author, Jamin Greenbaum, a doctoral candidate at the University of Texas at Austin's Institute for Geophysics. [Vanishing Glaciers: See Stunning Images of Earth's Melting Ice]

Scientists once thought an underwater ridge in East Antarctica protected the ice shelf from warm water, but the new study shows otherwise.

"This study actually shows there are holes in the ridge, which the warm water can get under, [go] into the ice shelf and melt it from underneath," said Peter Fretwell, a geographic information scientist at the British Antarctic Survey, who was not involved in the study. Fretwell wrote an opinion piece in the journal Nature Geoscience about the new findings.

Researchers of earlier studies have found deep, warm water in the ocean surrounding the glacier, but this is the first evidence that it could compromise the ice shelf itself. Totten Glacier's ice shelf is thinning by about 33 feet (10 m) a year, likely because warm water is melting it from underneath, the researchers said. And if the ice flowing through the glacier melts, it will be the equivalent of the entire West Antarctic Ice Sheet melting, the researchers found.

Unless snowfall outpaces coastal melting, the loss of Totten Glacier to the ocean may soon be irreversible, said the researchers, an international team from the United States, Australia, the United Kingdom and France.

Most Antarctic research has focused on the smaller West Antarctic Ice Sheet, a mass that is losing more than 36 cubic miles (150 cubic km) of ice a year. But when satellite data showed that the Totten Glacier was thinning, researchers decided to investigate.

They flew over the glacier, including the ice shelf, which measures about 90 miles by 22 miles (about 145 km by 35 km), so they could map the ice depth and topography.Their airplane was equipped with radar to measure ice thickness, lasers to map the shape and elevation of the ice and tools to detect the Earth's gravity and magnetic field strengths, which can infer seafloor shape.

After assembling the map, the researchers discovered two channels beneath the glacier. These channels, or valleys, may let warm ocean water reach the underside of the ice shelf, they said.

It may seem counterintuitive that warm water sits at this depth, but sea salt makes it dense and heavy, Greenbaum said. Deep, warm ocean water is also melting the West Antarctic Ice Sheet, the researchers added. But it's unclear how long the Totten Glacier melt may take. Like its western cousin, the collapse of the Totten Glacier could take centuries, continually increasing ocean levels as more ice melts, they said.

However, despite the detailed maps, researchers still need evidence showing that warm water is actually melting the ice shelf of the Totten Glacier, said Eric Rignot, a professor of earth and physical science at the University of California, Irvine, who was not involved in the study. [See a Guide to Antarctica (Infographic)]

"Until we have oceanographic data, showing that there is indeed warm water coming in that way, it remains a hypothesis," Rignot said.

Such data would include measurements of the salinity and temperature of the water in the area, which could show whether warm water is following the channel, or trough, at the base of the glacier, he said.

"But the stage is set," Rignot said. "You have a submarine glacier and a deep trough. The warm water is not too far from that frontal region and we've seen some changes in the glaciers that suggest that something is happening at their base."

Though research has historically focused on West Antarctica, "You can't ignore East Antarctica," Greenbaum said. "We really need to understand the physics behind these changes so that we can have accurate predictions of sea-level change for the next 100 to 1,000 years."

The study was published Monday (March 16) in the journal Nature Geoscience.