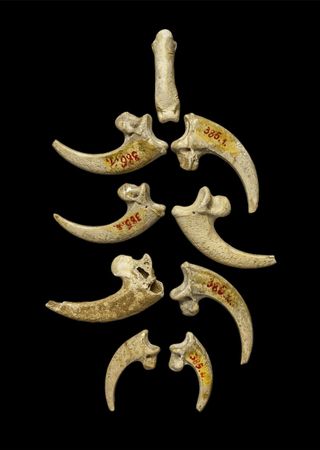 The eight eagle talons from Krapina arranged with an eagle phalanx that was also found at the site.
(Image: © Luka Mjeda, Zagreb)

Long before they shared the landscape with modern humans, Neanderthals in Europe developed a sharp sense of style, wearing eagle claws as jewelry, new evidence suggests.

Researchers identified eight talons from white-tailed eagles — including four that had distinct notches and cut marks — from a 130,000-year-old Neanderthal cave in Croatia. They suspect the claws were once strung together as part of a necklace or bracelet.

"It really is absolutely stunning," study author David Frayer, an anthropology professor at the University of Kansas, told Live Science. "It fits in with this general picture that's emerging that Neanderthals were much more modern in their behavior." [Top 10 Mysteries of the First Humans]

The talons were first excavated more than 100 years ago at a famous sandstone rock-shelter site called Krapina in Croatia. There, archaeologists found more than 900 Neanderthal bones dating back to a relatively warm, interglacial period about 120,000 to 130,000 years ago. They also found Mousterian stone tools (a telltale sign of Neanderthal occupation), a hearth and the bones of rhinos and cave bears, but no signs of modern human occupation. Homo sapiens didn't spread into Europe until about 40,000 years ago.

The eagle talons were all found in the same archaeological layer, Frayer said, and they had been studied a few times before. But no one noticed the cut marks until last year, when Davorka Radovčić, curator of the Croatian Natural History Museum, was reassessing some of the Krapina objects in the collection.

The researchers don't know exactly how the talons would have been assembled into jewelry. But Frayer said some facets on the claws look quite polished — perhaps made smooth from being wrapped in some kind of fiber, or from rubbing against the surface of the other talons. There were also nicks in three of the talons that wouldn't have been created during an eagle's life, Frayer said.

Now extinct, Neanderthals were the closest known relatives of modern humans. They lived in Eurasia from about 200,000 to 30,000 years ago. Recent research has uncovered evidence that Neanderthals may have engaged in some familiar behaviors, such as burying their dead, adorning themselves with feathers and even making art.

But scientists debate the extent to which Neanderthals were capable of abstract thinking. Deliberately making or wearing jewelry would suggest some degree of symbolic thought, as well as planning, Frayer explained. And the age of the talons suggests that if the Neanderthals were indeed wearing jewelry, they didn't pick up on the trend from modern humans.

"Eagle talons are not easy to find," Frayer said. "My guess is that they were catching the birds live — which also isn't easy."

The findings were published today (March 11) in the journal PLOS ONE.