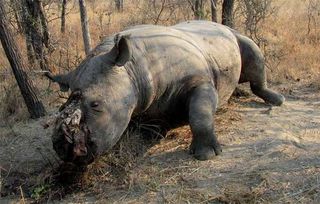 NEW YORK — Eight months ago, you could probably walk a few blocks from here, the Central Park Zoo, and find ivory for sale at a shop on Madison Avenue.

But not anymore: Last year, New York Gov. Andrew Cuomo signed a ban on commercial sales and purchases of ivory and rhinoceros horn.

That ban was just one in a series of encouraging signs that lawmakers and law enforcement are serious about stopping illegal wildlife trade around the world. Last year, the Obama administration issued a proposal to implement a near-complete ban on the ivory trade in the United States. Just last week, China imposed a one-year ban on ivory imports. And Tuesday (March 3), the Kenyan government burned some 15 tons of its ivory stockpiles to mark World Wildlife Day. [In Photos: US Destroys Its Elephant Ivory]

Meanwhile, wildlife crime experts and diplomats were gathered here, at the Central Park Zoo, to deliver a call to action to end the illegal wildlife trade, amid grim outlooks for animals like elephants and rhinos that are killed for their tusks and horns.

The Wildlife Conservation Society (the organization that runs the Central Park Zoo) estimates that 96 elephants die at the hands of poachers in Africa each day. A study by WCS researchers last year found that 65 percent of the population of forest elephants (just one of the subspecies of elephants in Africa) had been killed between 2002 and 2013.

Ambassador Marianne Bibalou of Gabon told the audience that a single elephant tusk might fetch $21,000. In Asia, African ivory may represent a $165 million to $188 million annual market, according to the United Nations' Convention on International Trade in Endangered Species (CITES).

The black market for rhino horn might be even more lucrative; the material can sell for $65,000 per kilogram (2.2 lbs.), making it more expensive than gold, Bibalou said. The possibility of such high rewards has driven a huge increase in poaching. Last year alone, a record 1,215 rhinos were killed in South Africa, according to new statistics released by CITES this week.

The figure is staggering considering that a decade ago, rhino poaching in South Africa was occurring at somewhat manageable levels. In 2007, there were just 13 rhino killings recorded in the country, said Nik Sekhran, director for sustainable development at the United Nations Development Program. The rhinos poached in Africa in 2014 might be worth between $63 million and $192 million, according to CITES.

Many biologists may shy away from putting monetary values on animals considered priceless, but others are looking at the problem of wildlife crime through an economic lens. For instance, in Uganda, one mountain gorilla is worth $1 million in tourism, so perhaps it shouldn't be a surprise that mountain gorillas are faring quite well in the country, said Doug Cress, the program coordinator for the Great Apes Survival Partnership (GRASP).

"It sounds cynical and cold, but if a species can pay for itself, it will be protected," Cress said.

A financial view is often useful for fighting crime, too, as poachers aren't going to be moved by pictures of dead elephants and rhinos, John Scanlon, secretary general of CITES, told the audience. But they will be motivated by risk and profit. With better enforcement of wildlife crime laws, the illegal wildlife trade could become too risky and the profits too slim to be attractive to criminal networks, Scanlon said. But that's only going to happen if the demand for ivory decreases and more people are arrested, convicted and jailed for their crimes, he added.

There has been tangible progress on the law enforcement front, said William Brownfield, a career ambassador who now works on wildlife crime for the U.S. State Department's Bureau of International Narcotics and Law Enforcement Affairs. For example, law enforcement officials from more than two dozen countries made 400 arrests of wildlife crime suspects — including several kingpins — during an effort called Operation Cobra II last year. And in 2013, the State Department offered up to $1 million for information leading to the dismantling of the Laos-based Xaysavang Network of wildlife traders.

Still, one of the biggest hurdles is public awareness among consumers who might not think twice before picking up an ivory trinket or a vial of rhino-horn powder billed as a traditional medicine in China. Nadya Hutagalung, a former MTV VJ-turned-activist, told the group that while she was filming a documentary in Asia, the vast majority of people she spoke to about ivory didn't know the material even came from elephant tusks, prompting gasps around the room here at the zoo.

"People don't know it's wrong, so how can we blame them?" Hutagalung said.