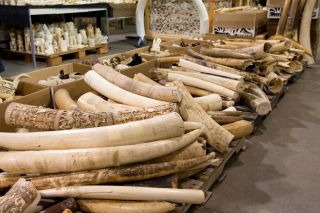 Vietnam could be the latest country to destroy its stockpiles of illegal wildlife products.

Officials with the Ministry of Agriculture and Rural Development of Vietnam say they are considering crushing rhino horn, elephant ivory and tiger bone, the Wildlife Conservation Society (WCS) announced.

"In recent years, the international community has recognized that Vietnamese citizens have emerged as key players in global illegal wildlife trade, as traders, transporters, traffickers and end-consumers for wildlife," Susan Lieberman, WCS executive director of conservation policy, said in a statement, applauding the move.

"If this decision is turned into action, it will set a high standard for other governments, and reinforce Vietnam’s commitment to treating wildlife crime as serious crime," Lieberman said.

Vietnam would join other countries that have recently destroyed their stockpiles of confiscated illegal wildlife items, often used in traditional Asian medicines, luxury goods and souvenirs.

In February, France pulverized more than 15,000 pieces of ivory, mostly trinkets seized at airports over a 20-year span. China burned six tons of ivory in January. The United States crushed its ivory stockpile for the first time in November. Officials in Hong Kong announced they would start burning more than 30 tons of elephant tusks and other ivory products throughout the first half of this year.

These public crushes and burns are largely symbolic, intended to delegitimize ivory and send a message of zero-tolerance to poachers and traffickers. (In a practical sense, these actions can also help cut the high costs of storing and guarding vast ivory stockpiles.)

Despite international bans, wildlife products like ivory and rhino horn remain in high demand, fueling poaching and smuggling networks. WCS estimates that 96 elephants are killed each day for their ivory in Africa, contributing to a 76 percent decline in elephant populations since 2002. Last year, a record 1,004 rhinos were killed in South Africa for their horns.