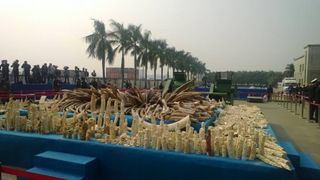 As part of an effort to discourage elephant poaching and the illegal trade in elephant ivory, China this morning (Jan. 6) destroyed part of its stockpile of confiscated ivory.

The ceremony, largely symbolic, was conducted in the city of Guangzhou in Guangdong Province, and destroyed 6 tons of ivory (including tusks and various carvings) by burning, according to news reports and a release from the Wildlife Conservation Society (WCS).

The event came on the heels of the destruction of the entire U.S. stockpile of confiscated ivory (also measuring 6 tons), in November. That ivory was destroyed in a rock crusher.

The ivory-burning event in China came just after an article in the Chinese newspaper Southern Weekly about Chinese demand driving much of the poaching of elephants in Africa lit up social media. Elephant numbers have declined drastically across much of the continent, with some 96 elephants killed each day on average, mostly for their ivory, according to the WCS.

Along with burning part of its ivory stockpile, China has increased some of its enforcement against illegally trading ivory, with the arrest last month of five poachers in Jilin Province, a record, the WCS said in its release.

"We congratulate China's government for showing the world that elephant poaching and illegal ivory consumption is unacceptable," said WCS president and CEO Cristián Samper. "We are hopeful that this gesture shows that we can win the war against poaching and that elephants will once again flourish."