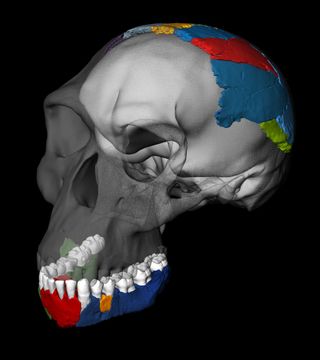 Researchers used bones of the Olduvai Hominid to reconstruct the Homo habilis skull, with the transparent parts based on a cranium from Kenya.
(Image: © Philipp Gunz, Simon Neubauer & Fred Spoor)

The extinct human species long thought of as the earliest known member of the human family may be at least a half million years older than previously thought, according to state-of-the-art computer models of the species.

The findings suggest that early human species may be more distinguished by the shapes of their jaws than the sizes of their brains, scientists added.

Although modern humans are the only human species alive today, other human lineages once lived on Earth. These extinct species, like modern humans, were members of the genus Homo.

The species long thought of as the earliest known member of that genus was Homo habilis, or "handy man," which paleoanthropologist Louis Leakey and his colleagues discovered in 1964. Thekey Homo habilis fossil is known as Olduvai Hominid 7, or OH 7 for short, which consists of a lower jaw, parts of a braincase and hand bones of a single individual. These bones were found in 1.8-million-year-old layers of earth in Olduvai Gorge in Tanzania. [See Photos of the Oldest Human Fossil Ever Discovered]

Over the past 50 years, scientists have had great difficulty working out which other fossils also belong to Homo habilis and which, if any, might belong to other species of early Homo. Solving this problem is key to understanding the dawn of the human lineage.

"The origin of the human lineage, what we call the genus Homo, took place between 2 million and 3 million years ago, but it's a period of time that's not very well-known in eastern Africa, where most evidence for early Homo so far comes from," said co-lead study author Fred Spoor, a paleontologist at the Max Planck Institute for Evolutionary Anthropology in Leipzig, Germany, and University College London.

A major reason for this difficulty is the poor shape in which the bones have been discovered: OH 7's lower jaw is distorted, and the partial braincase is broken into fragments. To address this problem, scientists have now used computed tomography (CT) scans and state-of-the-art 3D imaging technology to digitize and reassemble these bones virtually using computers.

This new analysis revealed that OH 7 possessed an unexpected mixture of features. For instance, the lower jaw is more primitive than previously thought, with a long, narrow shape. This resembles the jaw of the much older, more apelike species Australopithecus afarensis, best known for the fossil "Lucy," rather than more closely related human species such as Homo erectus.

However, the reconstructed braincase of OH 7 is not primitive at all. The brain would have been about one-sixth larger than previously estimated and similar to that seen in Homo erectus.

The new findings suggest Homo habilis is more primitive than previously thought, significantly pushing back its age. For instance, an upper jawbone from Ethiopia, known as AL 666-1 and dated to 2.3 million years ago, was previously thought to be a potential ancestor or early member of Homo habilis. However, these new findings suggest OH 7 is even more primitive than AL 666-1.

"AL 666-1 is simply too modern to be the ancestor of Homo habilis, which means Homo habilis has to have deeper roots than AL 666-1, extending back at least 2.3 million years," Spoor told Live Science.

"Sophisticated statistical analyses reveal differences in the shape of the jaw between these early human species that are sometimes as large as [the differences] between humans and chimpanzees," co-lead study author Philipp Gunz at the Max Planck Institute for Evolutionary Anthropology in Leipzig, Germany,said in a statement.

Previous research often considered variation in brain size to be an important differentiator among species of early Homo. However, this new study suggests that Homo habilis, Homo erectus and Homo rudolfensis cannot be distinguished by their brain size, in contrast to their major differences in jaws.

Another report announced today (March 4) describes a 2.8 million-year-old jaw that is now the earliest known member of Homo. This fossil, unearthed in the Ledi-Geraru research area in Ethiopia, may be an ancestor to Homo habilis and other species of early Homo, researchers said.

"You can see how the whole human lineage could derive from Australopithecus afarensis based on the 2.8-million-year-old Ledi-Geraru jaw," Spoor said.

The scientists detailed their findings in the March 5 issue of the journal Nature.