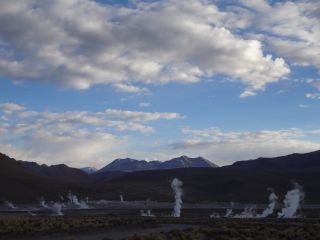 The El Tatio geyser field. There’s a bus to the right for scale.
(Image: © Michael Manga)

Like a hidden world of chutes and ladders, the loopy plumbing beneath geysers may explain what causes them to erupt, a new study finds. This finding could settle a long-standing debate over the workings of geysers.

Geysers erupt — sending steam and hot water hundreds of feet into the air, and often releasing a frightening screech and the stench of rotten eggs — because of a series of loops and side chambers hidden deep below the surface that allows water to boil first at the top and then cascade downward, the study found. [Watch Rare Eruption of the World’s Tallest Geyser | Video]

Less than 1,000 geysers exist worldwide, according to the study. Half of them are located in Yellowstone National Park, drawing more than 3 million tourists each year. There's no doubt that they have long captivated their audience. But despite the predictability of some geysers (like Old Faithful, in Yellowstone), they have long baffled research scientists.

To better understand the system hidden deep below the surface, Michael Manga, a researcher at the University of California, Berkeley, has spent years studying geysers in Chile and Yellowstone National Park. "We're trying to understand first, why do geysers exist?" Manga said. "Why don't they just continually emit water, like a spring?"

Then, the researchers correlated their underground measurements with external measurements. They used seismic sensors and instruments called tiltmeters to measure precisely how the ground shakes and rumbles during an eruption. They recorded how high the geyser shot water into the air each time and even measured the massive sound produced by small bubbles growing and collapsing in the air.

Manga and his students were able to use the images to recreate a model of El Jefe via a loop-de-loop apparatus in the lab. At the bottom of the device, there's a hot plate to simulate the hot rock deep underground. This heats liquid in a glass tube, allowing it to erupt periodically — though it doesn't erupt as regularly as the real one, nor is it accompanied by that awful smell.

They found that geysers seem to require a "special geology where steam can accumulate," Manga told Live Science. Specifically, they found a series of loops and side chambers hidden deep below the surface that allows water to boil first at the top. This boiling reduces pressure on the water below, allowing that water to boil as well. As such, the column boils from the top downward, spewing water and steam hundreds of feet into the air.

Although Robert Bunsen — the first geologist to take pressure and temperature measurements inside a geyser, in Iceland —was the first to postulate this pattern in 1846, subsequent studies at Yellowstone and elsewhere, found the opposite, Manga said. "There has been controversy in the literature about whether boiling [first] happens at the top or bottom," he said. [Infographic: Geology of Yellowstone]

The new research finally settles the controversy, demonstrating that water does, in fact, boil from the top downward. And it's those small nooks and crannies in the underground plumbing that first trap steam before bubbling it out slowly to heat the water column above.

There are still basic questions the team has yet to answer, however, like why some geysers are so faithful. Natural geysers are very complicated. "There are all kinds of pathways and cracks, all kinds of places where steam can accumulate," Manga said. The environmental conditions are changing, and yet the geysers are perfectly regular.

"Geysers come in a wide range of flavors and sizes and styles," Manga said. Some geysers interact with one another in peculiar ways; some geysers are sensitive to earthquakes hundreds of miles away (while others are not), and some even soak up water from underground magma, Manga said. He is planning to take his next trip to Yellowstone this fall, and he hopes further measurements will help shed light on the mysterious geological processes hidden deep below the surface.

The study was published in the February 2015 issue of the Journal of Volcanology and Geothermal Research.