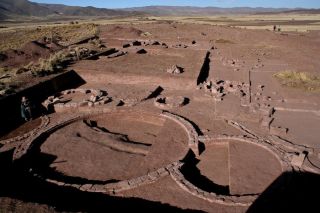 The foundation is all that's left of the round room where this ritual took place.
(Image: © Scott Smith)

At an ancient ritual complex in Bolivia, archaeologists discovered the ruins of a room where dead bodies were dissolved down to their bones in sizzling pots of caustic chemicals.

People traveling in llama caravans may have brought their deceased relatives to be "defleshed" in this way at the complex (on purpose) so they could leave with the plaster-coated bones as relics, according to a new study.

Founded during the late first century A.D., the site known as Khonkho Wankane was one of the smaller ceremonial centers to pop up in the Andes Mountains around Lake Titicaca before the rise of the more famous nearby ancient city of Tiwanaku. [8 Grisly Archaeological Discoveries]

Archaeologists were digging inside one of these round structures between 2005 and 2007 when they found a surprising group of artifacts.

"We expected to find typical household stuff — grinding stones, cooking pots and things like that — but the assemblage was quite different," said Scott Smith, an archaeologist at Franklin & Marshall College in Pennsylvania.

Smith and his fellow excavators found a bunch of human remains: 972 bone bits — mostly small pieces from the feet, hands, teeth and kneecaps — from at least 25 different people. A thin coating of white plaster covered the skeletal fragments, as well as several pottery vessels and llama-bone tools found in the room. There were also soft, chalky, white blocks in the room that turned out to be made of calcium oxide.

"It was such an odd assemblage of material that it really got us thinking about what they were doing in this room," Smith said.

Those calcium oxide blocks were a big hint.

When limestone is heated it up, it releases carbon dioxide and leaves behind calcium oxide, a substance also known as quicklime. This material becomes highly caustic and alkaline when it's mixed with water and heated up, Smith said.

"It can be used as a solvent to dissolve fats and tissue," Smith said. "My co-author has witnessed people using quicklime mixtures in Bolivia to remove fats from bones to make comparative collections for veterinary training."

The clues suggest that ritual specialists were processing dead bodies in this room at Khonkho Wankane. These specialists may have heated their caustic limewater mixture in pots to disarticulate and clean the bones of the deceased.

When exposed to the air, this mixture left a thin plaster coating on the bones, as well as the cooking vessels and tools it touched. Some of the bones and pots also had traces of red pigment, suggesting that painting the bones may have been a part of ritually treating the dead.

An isotope analysis of some of the bones and teeth found in the room suggests the people whose bodies were processed at Khonkho Wankane were not locals; telltale signatures of strontium showed that the deceased at least grew up outside of the southern Lake Titicaca basin. (Those results will be published in a forthcoming study.) This suggests mobile populations periodically visited Khonkho Wankane for ritual purposes, perhaps traveling in llama caravans.

The whole ritual process might explain why mostly small bones were found at the site; people might have been more likely to take away their relatives' skulls, ribs and long bones from the limbs.

Was it creepy to keep the bones of your mom or grandfather around after they died? Maybe not — people who occupied the Andes several centuries ago may not have seen a sharp distinction between the living and dead.

"For various cultures in the Andes, the dead were active participants in life," Smith said. "It wasn't that people were buried and then forgotten about and memorialized." [After Death: 8 Burial Alternatives That Are Going Mainstream]

For instance, it wasn't uncommon for the Incas (who came onto the scene much later than the people who lived at Khonkho Wankane) to interact with the mummified remains of past rulers — consulting with them on political matters and involving them in important religious ceremonies, Smith said.

Smith and his colleagues published their findings in this month's issue of the journal Antiquity. The study was part of the Jach'a Machaca Archaeological Project, a collaborative effort involving Bolivian archaeologists, North American archaeologists and the indigenous Aymara community.

"Our interpretation of this structure was only possible because these different artifacts and human remains were preserved in place," Smith said. "This structure had not been disturbed by looting or illegal excavation, and the community has done an excellent job protecting the archaeological site."