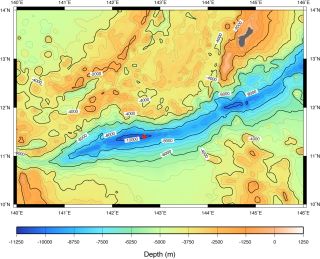 The Challenger Deep is the deepest canyon in the oceans. The red circle shows the sampling location.
(Image: © JAMSTEC)

A few years ago, film director James Cameron spent hours scouring the world's deepest ocean canyon for any sign of life. He found a few bizarre animals, but it turns out the real action in the Mariana Trench happens beyond the reach of a submersible's camera.

Researchers from Japan discovered microscopic bacteria thrive in the canyon called Challenger Deep, which is the lowest point on Earth's surface and the deepest part of the Mariana Trench, the team reports today (Feb. 23) in the journal Proceedings of the National Academy of Sciences. In particular, they found an unusual community of bacteria there called heterotrophs, or microbes that cannot produce their own food and must eat what they find in the water.

Cameron found that larger life forms were scarce compared to shallow ocean waters. However, the heterotrophic life in Challenger Deep's waters was relatively abundant, similar to that in untreated well water, said lead study author Takuro Nunoura, a microbiologist with the Japan Agency for Marine-Earth Science and Technology (JAMSTEC).

The average depth of the ocean floor is about 13,120 feet (4,000 meters); its deepest point is in the western Pacific's Mariana Trench, where the Challenger Deep canyon bottoms out at more than 36,000 feet (nearly 11,000 m) below sea level. All kinds of microscopic life are found in the seafloor at this depth, from bacteria and archaea to yeast and viruses, according to this and other studies. [Infographic: Tallest Mountain to Deepest Ocean Trench]

The heterotrophs in the Challenger Deep likely derive food from sinking particles, such as dissolved fecal pellets or dust, or possibly from geologic processes such as earthquake-triggered landslides, which could send organic-rich sediments tumbling into the canyon's depths, the researchers said.

"These big slope collapses are rare accidents in terms of human life spans, but they happen very frequently on a geologic timescale, and the release of organic compounds could continue for a very long time," Nunoura told Live Science.

Recent studies in the Challenger Deep by a separate team also reported that the sediments there host more microbes than the nearby vast, deep ocean floor — called the abyssal plains.

The research team measured the abundance of life and the temperature, salinity and chemistry of seawater from the surface waters above the Mariana Trench to the bottom of the Challenger Deep with a remotely operated vehicle. They found the ocean's microbial diversity varied with depth. Genetic-fingerprinting techniques identified different microbes based on certain genes, and also indicated the relative abundance of different species.

The ocean's invisible life was found at all depths, but microbes were most abundant near the surface and on the ocean floor, where they can find the most food. The ocean was stratified into layers, with a warm, salty layer on top and a colder, less salty layer starting about 1,300 feet (400 m) below the surface. The deepest water was about 1 degree Celsius (34 degrees Fahrenheit).

Plantlike phytoplankton crowded the surface waters. (Light only penetrates into the upper 328 feet, or 100 m, of the ocean.) Chemolithotrophs, or microbes that survive by converting compounds such as sulfur and ammonia into food, were abundant in the nutrient-poor abyssal zone but declined below a depth of 19,685 feet (6,000 m), to be replaced by heterotrophs, the study found. The abyssal zone ranges from 6,560 feet to 16,400 feet (2,000 m to 5,000 m).