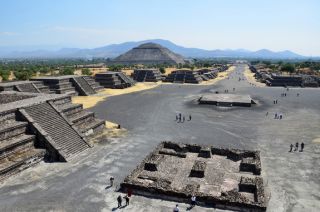 Ancient settlements like Teotihuacan could hold clues to the origins of cities.
(Image: © Shutterstock.com/trappy76)

Before Spanish conquistador Hernán Cortés destroyed the Aztec capital Tenochtitlan in 1521, he marveled at its impressive size and wealth. In a letter to his king, he wrote that the city was as big as Seville or Cordoba back home. Tenochtitlan had boulevards, bustling markets, canals, courthouses and temples. The Aztecs didn't model their capital after a European city, but what Cortés saw was remarkably familiar.

Sure, each city has its own local quirks, architecture, language and cuisine. But recently, some theoretical scientists have started to find there are universal laws that shape all urban spaces. And a new study suggests the same mathematical rules might apply to ancient settlements, too.

Using archaeological data from the ruins of Tenochtitlan and thousands of other sites around it in Mexico, researchers found that private houses and public monuments were built in predictable ways. [In Photos: Amazing Ruins of the Ancient World]

A theory of living cities

"We build cities in ways that create what I like to call social reactors," said Luis Bettencourt, who studies complex systems at the Santa Fe Institute in New Mexico.

In Bettencourt's eyes, a city isn't just a brick-and-mortar physical space; it's also an invention designed to sustain social interactions on a daily basis, to throw a lot of people with different specializations together to solve complicated problems that they wouldn't be able to tackle on their own.

As it turns out, that invention might be a really old one, dating back to the time when humans first started to be social.

During a fellowship at the Santa Fe Institute, anthropologist Scott Ortman heard Bettencourt's group give a presentation and thought their ideas might apply to ancient cities, too.

"What I realized was that none of the parameters they were discussing in these models had anything to do with modern capitalism, democracy or industrialization," said Ortman, who is now a professor at the University of Colorado, Boulder. "Their parameters are basic properties of human social networks on the ground. And so I thought, 'Well, gosh, if that's true, then these models should apply very broadly."

Ortman banded together with Bettencourt to test whether the models would indeed hold up for long-gone cities. The challenge was to find the right data set. To analyze the productivity of modern cities, researchers are spoiled with census statistics, economic reports, satellite maps and detailed measurements of infrastructure. For ancient cities, they have to look for more subtle clues.

Ortman and Bettencourt turned to a rare set of data on the pre-Hispanic Basin of Mexico that was collected during an extensive archaeological survey in the 1960s and 1970s — before many of the ancient sites in the region were covered by the expansion of Mexico City. [Album: The Seven Ancient Wonders of the World]

The survey covered 2,000 years of history, from about 500 B.C. up until the beginning of the colonial period in the 1500s. It spanned about 1,550 square miles (4,000 square kilometers) containing thousands of settlements, from small towns with just a few hundred people to grand cities like Teotihuacan and Tenochtitlan, which had an estimated population of 200,000.

In a study published in the journal PLOS ONE last year, Ortman, Bettencourt and their collaborators showed that these ancient settlements got bigger and denser much in the same way modern cities do. When larger, networked cities doubled in population, the space they occupied didn't double, but instead grew slower, by about 83 percent. This result, Bettencourt said, is a compromise between the need for personal living space and the need to maintain social networks. (If a city doubled in size every time its population grew, it would become too costly to get around.)

For the new study, the researchers wanted to look at the socioeconomic productivity of these cities, so they focused on public monuments (like temples) and domestic houses, which they thought would be good proxies for public and private wealth.

They found that these diverse ancient settlements generally showed the same increasing returns of urban scaling that's been observed in modern cities. As cities grew in population, so did the rate at which they were able to produce monuments.

"What's interesting is that this expresses exactly the same as GDP," Bettencourt said.

The same was true for private wealth. The researchers reasoned that house size would reflect income and accumulated wealth. The surface area of houses got predictably larger as the settlement size grew, and the distribution of house area was even quite similar to the distribution of income that's observed in cities today, Bettencourt said.

The study, which was published today (Feb. 20) in the journal Science Advances, is the first to apply these archaeological data, and Ortman said it would be an "astounding result" if it holds up across other sites and ancient cultures.

"It implies that some of the most robust patterns in modern urban systems derive from processes that have been part of human societies all along," Ortman said. "I just think that's an amazing concept."

The idea is winning over some other archaeologists, too.

"What I find exciting about the results is that they suggest that the archaeological record contains a treasure chest of experiments in human social life," said David Carballo, an archaeologist at Boston University who was not involved in the study.

Another archaeologist, Michael Smith, who studies the Aztecs at Arizona State University, was invited to Santa Fe a year and a half ago to take a look at what Ortman and Bettencourt were working on.

"I went up, prepared to tell them this is a ridiculous idea," Smith said. Ancient cities weren't profit-oriented, they didn't have capitalist investment like they do today and they were more likely to have rulers with a tight grip on the economy, Smith said, so he didn't think the same rules would apply to their growth. But he left New Mexico a convert.

"They convinced me that the reason behind the scaling regularities is a more general phenomenon that has to do with the way that people interact within a particular environment," Smith said. "I find this stuff really exciting because it suggests that there's something really fundamental about human interactions — and human interactions in cities — that transcends modern economies."

Smith wasn't directly involved in the new study, but he is collaborating with Bettencourt and Ortman to look for more archaeological data sets to test whether these theories about urban scaling hold up for medieval cities, pre-Hispanic farming villages in North America and other settlements.