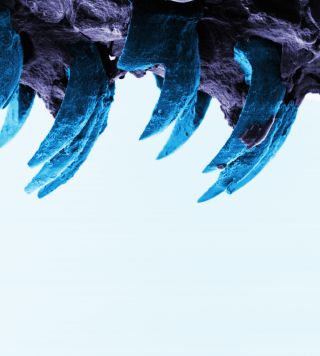 The teeth of the common limpet species (Patella vulgata) are tougher than Kevlar and stronger than spider silk, researchers report in the Feb. 18 issue of The Royal Society journal Interface.

"Spider silk has been winning this competition for a long time. I was surprised and excited that limpet teeth beat the winner," said lead study author Asa Barber, a professor of mechanical engineering at the University of Portsmouth in England.

Limpets are tough little snails that live everywhere in the ocean, from the deepest, darkest canyons to the roughest, toughest surf. Their jaunty, cone-shaped shell protects a sturdy foot that clings to rocks with a phenomenal grip. Limpets dine on algae, unrolling a long tongue studded with hundreds of sharp teeth that scrape their dinner off boulders and cliffs. [Biomimicry: 7 Cool Animal-Inspired Technologies]

Though limpets leave behind only scratched rock, no one had ever tested the strength of their teeth, Barber said. "Nature always develops the perfect structure for a particular mechanical job, so I thought, 'They've got to be really strong,'" he told Live Science.

It turns out that Southampton's local limpets grow mineralized teeth that are 10 percent tougher than spider silk, Barber said.

Barber and his research team tested microscopic pieces of limpet tooth. Each curved tooth is about 1 millimeter long (0.04 inches)  — about the thickness of a dime — and the scientists wanted to be sure their samples weren't affected by the curvature. Each sample was about 100 times thinner than a human hair.

The secret to the tooth strength lies in the size of the fibrous structures that form each tooth, Barber said. "Nature's kind of clever, because it figured out millions of years ago that if you grow these fibers below a critical size, even if you have flaws in the material, it doesn't affect the strength," Barber said.

The limpet uses composite fibers that are thousands of times thinner than the man-made nanofibers in airplanes, bulletproof vests or bicycle frames. The biological composites are a mix of the iron oxide mineral goethite and chitin, which acts like a natural plastic, Barber said.

Although goethite is hard, it's not very tough — it will fracture and break when smashed against a rock. That's where the chitin comes in: The stretchy, pliant fibers, when combined with goethite, create a natural composite material that is both strong and tough.

The teeth fibers withstood a pulling force that was equivalent to a spaghetti strand hoisting 3,000 bags of sugar, equivalent to about 3,300 pounds (1,500 kilograms), Barber said.

Barber's next challenge lies in recreating the mechanisms these tiny creatures use to make their tough materials. Though spider silk has proved notoriously difficult to mimic in an artificial setting, Barber said it might be possible to 3D-print limpet teeth fibers.

"I think the potential for growing these crystal fibers is much higher [than spider silk] because it's just about growing them to a particular size," Barber said. "I think this is going to be a much greater opportunity for materials that have high strength."

Ultrastrong spider silk is one of the toughest natural fibers known in nature. The light, flexible fiber is five times stronger by weight than high-grade steel and extremely stretchy, enlarging to snag incoming insects and other prey. The strongest silk ever found is made by the Darwin's bark spider in Madagascar, which spins silk that is reportedly 10 times tougher than Kevlar, thanks to its elasticity, or ability to stretch without breaking.