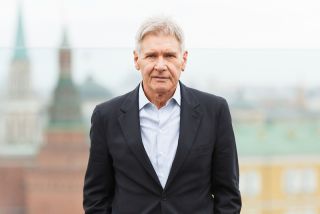 The June 9 issue of "People" magazine has a disturbing photograph of actor Harrison Ford.

There he is, the hunk aka Han Solo and Indiana Jones, walking along the beach at the Cannes Film Festival wearing a man-bra.

I swear. [Men vs. Women: Our Key Physical Differences Explained]

Ford is dressed in a pair of black pants and a slate blue T-shirt that shows off his buff mid section. But that T-shirt also reveals the shadow of what has to be a manzeer, in the parlance of Seinfeld.

And he needs it.

Mr. Ford, for all his aging manliness, has a set of man boobs that many women would envy. Which brings us to the age-old question that anthropologists have been answering for centuries: Why do men have breasts and nipples?

They have them because men start out as women.

As much as men hate to hear this, the human fetal blueprint is initially female. We all begin as a ball of cells that quickly differentiates into various body parts. At five weeks of gestation, the fetus sports a neural tube that eventually becomes the spine, but other than that, we all look like a wad of chewing gum. Then at six weeks' gestation, the outlines of eyes, arms, legs and a face (and let's not mention the tail that also shows up for a while) appear.

It's not until about week six that the fetus also begins to take on the biological accoutrements of gender.

If the fetus has a Y chromosome, testosterone will turn the buds for sexual organs into testes. Once in operation, those testes will pump out even more testosterone and, voila, a penis appears.

Female fetuses aren’t swayed by testosterone and so they stick with the fallback blueprint that calls for ovaries and a vagina.

But the developmental secret here is that breasts and nipples are already in place before testosterone shows its hand and starts shaping cells into male organs.

In other words, men have breasts and nipples because they already had them before they became male.

But then why didn't evolution opt to remove those seemingly useless female parts?

Because evolution doesn’t simply wipe out unnecessary physical bits and pieces. Those parts have to be a burden, or be in the way of survival and reproduction for evolution to take notice. Since there's no real caloric cost to men having boobs, evolution has no impetus to erase them.

In fact, men's breasts are a good lesson in the higgledy-piggledy way that evolution works. Natural selection chooses for and against body parts, but there is no master plan that aims for the perfect creature. Men have boobs, women get facial hair, and we all stand in front of the mirror asking, "Why?"

Each person is, in fact, a Rube Goldberg sort of organism pieced together by biology and made up of good parts, bad parts and parts that are inconsequential.

But Mr. Ford should also know that his fans really don’t care about the manzeer. Believe me, even with the moobs (man boobs), any woman over 40 would be glad to have him for the night, even if it meant throwing a towel over his chest.

In fact, wearing a manzeer is probably not hurting Mr. Ford's potential reproductive success at all. I bet there are lots of women of child-bearing age, those who watched "Star Wars" as babies, or those seeing Indiana Jones for the first time this summer, who would also be happy to close their eyes for a moment with what we gals know in our heart of hearts is a real man.

Manzeer be damned, we love him.