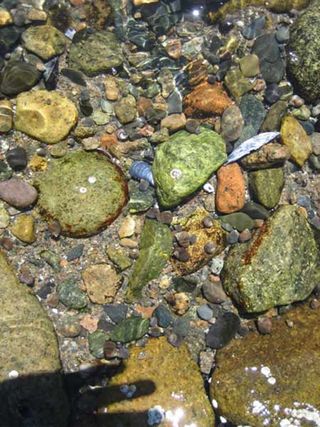 It's human nature to seek out bodies of water.
(Image: © Meredith F. Small)

I am lying on hot slab of rock on the coast of Maine. Fifty feet down to my right, the Atlantic Ocean crashes against a cliff face. I watch as the water spews upward and across a pile of boulders, leaving tide pools in its wake. I am completely mesmerized. The waves come and they go and I stare and stare, my mind totally blank. But then I realize it's not so much blank as content, mentally at rest, and that it's been a while since I've felt this good. The water has apparently washed away any thoughts of stuff I need to do for work, or personal troubles that days before were weighing me down. I'm on vacation, I say to myself, and that's why happiness has taken over my brain. But then I realize it's human nature to seek out bodies of water. In fact, maps of the world's population show that the bulk of humanity today lives near water. We live along coastlines, around the rims of bays, up the course of rivers and streams, and on islands. We also vacation at the beach and find solace fishing on a lake. Nothing makes small children happier than the chance to splash through puddles. More surprising, this human penchant for water makes evolutionary sense. Sure, we need drinking water to live, but we have also benefited from what's swimming under the waves. Neuroscientist Michael Crawford of the University of North London has proposed that our ancient ancestors were devotees of the sea, and that their devotion paid off by allowing the human species to develop large and complex brains. Crawford claims that when humans separated from apes and emerged from the forests of Africa, they stuck close to rivers and beaches and started feasting on fish, clams and crabs. That marine diet was packed with omega-3 fatty acids, essential fatty acids that promote brain cell growth. It's no coincidence, Crawford claims, that human brain growth began to increase exponentially once we left the woods and headed for the beach. Scientists have also discovered that people who eat fish regularly, like I've been doing since we crossed the Maine state line, are less like to suffer from depression than those who eschew seafood. Psychiatrist and lipid biochemist Joseph Hibbelin of the National Institutes of Health has shown that across cultures there is a direct correlation between ounces of fish eaten each week and rates of depression. More interesting, Hibbelin and researcher Laura Reis have found that fish is commonly used as a symbol of happiness and good health in various religions and cultures. We know that fish and the sea are good for us, and so we seek them out, and when we move inland, or go home from vacation, we sadly lose touch with our maritime roots. Meredith F. Small is an anthropologist at Cornell University. She is also the author of "Our Babies, Ourselves; How Biology and Culture Shape the Way We Parent" (link) and "The Culture of Our Discontent; Beyond the Medical Model of Mental Illness" (link).