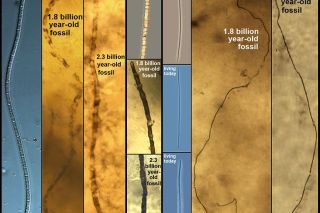 These sulfur bacteria haven't evolved for billions of years.
(Image: © UCLA Center for the Study of Evolution and the Origin of Life)

Wedged inside rocks in the deep sea off the coast of Western Australia lurks an organism that hasn't evolved in more than 2 billion years, scientists say.

But do the findings contradict Darwin's theory of evolution? [Evolution vs. Creationism: 6 Big Battles]

"It seems astounding that [this] life has not evolved for more than 2 billion years — nearly half the history of the Earth," the study's leader, J. William Schopf, a paleobiologist at UCLA, said in a statement. "Given that evolution is a fact, this lack of evolution needs to be explained."

Darwin's theory of evolution by natural selection states that all species develop from heritable genetic changes that make an individual better able to survive in its environment and reproduce.

So how can Darwin's theory account for these apparently nonchanging bacteria? The answer comes in looking at the bacteria's similarly stable surroundings. True, the deep-sea bacteria in this study haven't changed for eons, but neither has their environment, Schopf said. Darwin's theory doesn't call for organisms to evolve unless their environment changes, so the microbes' lack of evolution is consistent with the theory, Schopf added.

To compare the fossils, Schopf and his colleagues used a method known as Raman spectroscopy to measure the composition and chemistry of the rocks. Then, using confocal laser scanning microscopy, they produced 3D images of the fossils and compared these visualizations with the modern bacteria. The ancient microbes looked identical to the present-day ones, the team found.

The fossils studied date back to a period known as the Great Oxidation Event, which occurred when oxygen levels surged on Earth between 2.2 billion and 2.4 billion years ago. During this time, there was also a large rise in sulfate and nitrate levels, which provided all the nutrition the sulfur bacteria needed to survive and reproduce. The environment inside these deep-sea rocks hasn't changed since then, so there has been no need for the organisms to adapt, the researchers said.

The findings were published yesterday (Feb. 2) in the journal Proceedings of the National Academy of Sciences.