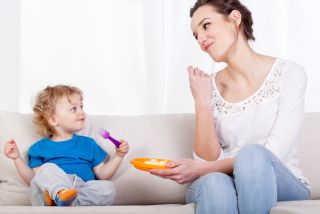 When parents are scrambling to feed hungry toddlers, the lure of convenient, pre-packaged food is strong. Unfortunately, new research finds that many foods marketed to the 1- to 3-year-old set are high in salt and added sugar.

In fact, 72 percent of premade toddler dinners far exceed the recommend limits on their sodium content, according to the new study published today (Feb. 2) in the journal Pediatrics. Meanwhile, 32 percent of toddler dinners, and most fruit-based and savory snacks, include at least some added sugar, the researchers reported.

"Some of the foods had about similar [sugar or salt] content to what we see in adult foods," study co-author Mary Cogswell, a senior scientist in the division for heart disease and stroke prevention at the Centers for Disease Control and Prevention (CDC) told Live Science. "For example, in the category of savory snacks or salty snacks, the average sodium concentration, or amount of sodium per 100 grams, was about the same as you see in plain potato chips."

These findings are concerning, Cogswell said, because research shows that kids set their taste preferences early in life. If they become accustomed to the taste of lots of sugar and salt during their toddler years, they may end up with unhealthy diets as adults. [10 Ways to Promote Kids' Healthy Eating Habits]

The good news, Cogswell said, is that foods marketed for infants are mostly low in salt and added sugar. Of the 657 infant products studied, 655 had less than 140 milligrams of salt per serving, which is the level below which the Food and Drug Administration (FDA) labels foods "low sodium."

Most infant products likewise avoided added sugar, with the exception of ready-to-serve mixed-grain and fruit products. More than half (52 percent) of those mixes included at least one type of added sugar, and 44 percent derived more than 35 percent of their calories from sugar. [The 7 Biggest Diet Myths]

For toddlers, the nutrition situation was far worse. Both toddler dinners and snacks were high in salt. The savory snacks studied had an average sodium concentration of 496 mg per 100 grams of food. And surprisingly, Cogswell said, the majority of savory dinners and snacks also included added sugars. These sweeteners appeared in dishes that are not sweet, such as pre-made macaroni and cheese, or pre-packaged chicken and pasta meals.

Toddlers can be picky, and sweet-and-salty foods are palatable. But Cogswell recommends persistence in getting kids to eat the healthy stuff.

"Research shows that if you offer neutral foods, fruits and vegetables, at least eight times, kids are more likely to develop a taste for those foods," she said. The message, she added, is "keep trying."

Parents should also turn an eagle eye toward nutrition labels. Not all pre-packaged foods are created equal.

Finding sugar levels can be tricky, as added sugar can show up on labels under various names. Look for corn syrup, dextrose, glucose, fructose, lactose, sucrose, trehalose, juice concentrate, cane, malt, maltose or turbinado. In 74 percent of cases, the researchers found, these added sugars will be among the first four ingredients in the food (and thus, can make up a large portion of the food).

"This study shows that toddlers are exposed to foods that have an unnecessarily high content of salt and sugar," the doctors wrote. "This could lead them to develop a desire for these tastes for the rest of their lives."