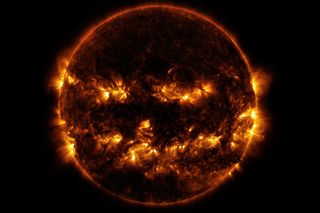 The sun and its spots shine in 335 angstrom extreme ultraviolet light in this image from NASA's Solar Dynamics Observatory Oct. 8, 2014.
(Image: © NASA/SDO)

Minda Berbeco is programs and policy director at the National Center for Science Education and visiting scholar at the UC Berkeley Museum of Paleontology. She contributed this article to Live Science's Expert Voices: Op-Ed & Insights.

Recently, a college senior reached out to me, looking for tips on how to present her research to the public. We went around in circles for a while, until it became clear that the "public" she was targeting was the legislature in her fossil-fuel-loving state, her research was on climate change and her question was not, "How do I make this accessible?" but rather, "How do I survive?"

I quickly assured her that no one was going to attack her — that, at worst, people might be dismissive of, or uninterested in, her research. I suggested that other concerns might be more pressing: getting good grades, finding a place in a research lab, securing employment after the completion of her graduate work. As for the public, I finished by saying, "My goodness; they can't hurt you, they can't fire you and they can't give you an 'F.'" Afterward, though, I wondered, "Is that really true?"

The hazards of a climate science career

My afterthought arose, in part, from several talks I attended later that day by scientists whose research focuses on climate change. Ben Santer is a climate scientist at the U.S. Department of Energy's Lawrence Livermore National Laboratory and he worked on the U.N. Intergovernmental Panel on Climate Change report, a definitive assessment of the science. In his remarks, he explained how he found his personal and scientific integrity challenged in the mid-1990s — not by other scientists, but on the opinion pages of the Wall Street Journal.

Michael Mann, a climate scientist at Penn State who was formerly at the University of Virginia, also described his personal and professional nightmare: He was targeted by then-Virginia Attorney General Ken Cuccinelli, who tried to comb through the university's files in an attempt to debunk Mann's research. (Courts, including the Virginia Supreme Court, found that Cuccinelli's demands exceeded his authority.) [Michael Mann: Climate-Change Deniers Must Stop Distorting the Evidence (Op-Ed)]

Sadly, those stories are not unique. It raises the question of whether a Ph.D. in the sciences now requires a secondary degree in law. In fact, the harassment of climate scientists has become so prevalent that a nonprofit group, the Climate Science Legal Defense Fund, has popped up for the sole purpose of providing legal counsel to climate scientists.

The pressure of teaching climate science

It's not just scientists who experience such pressure; it's science teachers, too. When I first started at the National Center for Science Education, an institution that has spent decades relentlessly defending the teaching of evolution (and, more recently, climate change) in public schools, I was taken aback by the hate mail we received. Within a month, I had a serious conversation with my husband about whether he felt safe with me working there. It is a conversation we have revisited since the birth of our son.

In my work, I regularly interact with teachers who tell me, with varying levels of frustration and tears, about their own experiences in the classroom as they simply attempt to teach accurate science. When I was a graduate student in biology, my standard equipment was a microscope. Now, I feel like it should be a box of tissues. [Is the GOP Waging a War on Science?  ]

It's not these teachers that I'm primarily worried about, however. After all, I'm hearing mainly from teachers who, despite their frustration and misgivings, are impressively standing up to the pressure, withstanding the withering attacks and attempts to compromise the integrity of their science education. Rather, I'm worried about teachers, and aspiring teachers, I'm not hearing from — those who see such attacks, consider their life circumstances (their families, their job security, etc.), and question whether they, too, could handle such attacks.

Many people conclude that they could not — and that is when science education loses, as science teachers leave the field or avoid socially, but not scientifically, controversial topics like evolution or climate change in order to stay under the ideological radar.

Thus, both scientists and science teachers are facing similar challenges. It's no wonder, although it's certainly welcome, that in recent months, there have been compelling and strong stories of educators, scientists and community members working together to support the integrity of science education.

When a rogue West Virginia board of education member attempted to undermine the newly instituted science standards by including incorrect information on climate change, the state exploded. Scientists spoke up, teachers were livid, and community members wrote to the governor and showed up to the board meeting to testify. As a result, the board reversed its decision, and the original standards are back on track to being restored.

Similarly, in Texas, when community members got wind of attempts to integrate similar misinformation on climate science into social-studies textbooks, they immediately responded. They created petitions, contacted the publishers, created talking points to engage with the press and, most important of all, showed up at board meetings to have their voices heard. In every case, the publishers fixed their errors.

Can you imagine if every community worked so quickly to support science education? What if it wasn't the young scientists or teachers who didn't need to worry, but the politicians who attempted to institute these fallacies? What if we could turn to all young scientists and teachers, and tell them, "We have your back"? It's a shame that we would have to, but given what has happened thus far, isn't it about time we tried?