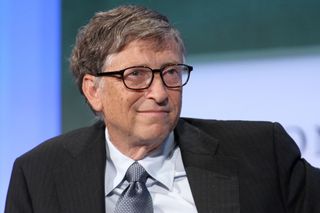 Bill Gates built the world's largest software company, and with his billions, he's also become one of the world's most prolific philanthropists. But there's still one thing that he says makes him feel dumb: not being able to speak a foreign language.

Gates took questions from the public today (Jan. 28) in his third Reddit "Ask Me Anything" forum online. One participant asked the Microsoft co-founder: "Is there anything in life that you regret doing or not doing?"

Gates replied: "I feel pretty stupid that I don't know any foreign languages. I took Latin and Greek in high school and got A's and I guess it helps my vocabulary, but I wish I knew French or Arabic or Chinese. I keep hoping to get time to study one of these — probably French because it is the easiest." [10 Ways to Keep Your Mind Sharp]

Gates added that he tried to use Duolingo, a crowdsourced language-learning platform, but didn't keep up with his lessons. He praised Facebook founder Mark Zuckerberg for learning enough Mandarin to answer questions from Chinese students.

Perhaps it's not surprising that there's some wisdom in Gates' answer. Knowing multiple languages isn't just useful for globe-trotting businessmen and philanthropists. Studies have shown that learning a new language is good for the brain, and some evidence even suggests it might help stave off Alzheimer's disease.

A 2011 study of hundreds of people with Alzheimer's found that bilingual people were diagnosed with the disease an average of four years later than those who spoke just one language. Another study, in 2013, found that adults in their 60s who had spoken two languages since childhood were able to switch from one task to another faster than their monolingual peers.

Bilingual people also seem to have an advantage when it comes to filtering important information from background noise. Last year, researchers reported in the journal Brain and Language that people who spoke only one language had to work harder to focus on a single word than bilingual people. The same researchers previously found that bilingual children were better-equipped to ignore noise in their classrooms than their one-language peers.

Alas, adults have a harder time than young kids picking up a new language. One study last year found that this might be because adults try too hard. But that shouldn't discourage those who didn't grow up in a bilingual household, the researchers said. In another study published last year in the journal Frontiers in Psychology, researchers found that young adults who could speak two languages performed better on attention tests than their peers who spoke only one language, regardless of when they had learned that second language.