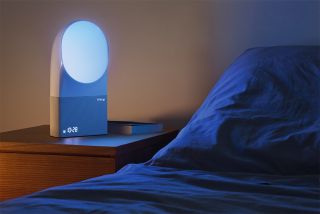 The Withings Aura is a device that aims to track how long and how well you sleep, and also helps you fall asleep by playing soothing ocean sounds and washing crimson sunset lights over you. In the morning, the Aura gently wakes you to beautiful tunes, while shining a blue light on you.

The Aura is made up of two main pieces: a sleep sensor, which looks like a small pad and is put under the mattress, and a bedside device, which looks like a nightstand lamp. The sensor and bedside device communicate via Bluetooth with the Withings app on your iPhone (currently, there is no Android version), so you can set your alarm on your phone.

I used the Aura for a few days to test how it works. At $299.95, the Aura may be too pricey for a device that just tracks your sleep and has an alarm clock. (There are fitness trackers that cost less and offer those features.) Nonetheless, I greatly enjoyed using it, and found it to be a beautiful addition to my room, which I thought looked like a futuristic spa in those foggy moments when I was falling asleep. Your opinion of the device, however, may depend on your taste as well as your room's arrangement. In any case, the Aura is a large, white block that is unlikely to go unnoticed. [11 Odd and Intriguing Smart Home Technologies ]

The Aura has a modern design, and interacting with the device is very intuitive. Instead of buttons, the Aura has a touch-sensitive surface. You can trigger all of the Aura's functions with hand movements. For example, one tap on the device activates the sleep mode, and you can dim the lights or change the volume of the speaker by rubbing your hand over the right-hand side of the device.

The Aura starts your sleep cycle at night by shining a red light. The idea behind this function is that some studies have suggested a link between certain wavelengths (or colors) of light and the brain's secretion of melatonin, which is the hormone that regulates the sleep-wake cycle. It is thought that red light may promote the brain's secretion of melatonin, making you feel sleepy, whereas blue light is said to interfere with melatonin production, which would have the opposite effect. The Aura shines a blue and purple light in the morning, when it's time for you to get up.

The sleep sensor is designed to be used by one person, but you can purchase a second one and plug it into the same bedside device in order to track the sleep of two people. The bedside device, which has to be plugged into a wall outlet to work, also has a free USB port for charging your phone.

Aura's sleep sensor tracks your movements during sleep to determine your sleep phases. Most sleep trackers on the market also use this principle to monitor sleep phases, but the method is far from a perfect way to measure the quality of your sleep. As a result, there are limits to what you can learn about the quality of your sleep by looking at this data, experts say. [Related: How Accurate Are Sleep Trackers?]

In the morning, you can see your data on a graph in the app. It shows how long you slept, the time it took to fall asleep and the number of times you woke up during the night. The app also breaks down your sleep into light, deep and REM (rapid eye movement) stages based on how much you moved during the night. You can track and review your nightly data over time.

Like some other sleep-tracking devices and apps, the Aura also has a "smart wake-up" function that aims to wake you when your body is ready to do so. To do that, the Aura lets you choose when you want to wake up, and also a window of time — for example, 20 minutes — around your intended wake-up time. Within this window, the Aura's alarm goes off when you are in the lightest stage of sleep, according to Withings. The device brings you to awareness slowly, by brightening its lights and playing smooth sounds. I liked waking up this way, but I can't tell with confidence whether it was because this function really works well, or whether I woke up nice and easy every morning simply because the sound of the Aura is far gentler than my phone's horrifying alarm tones.

The Aura also has a bonus function: a nap feature. By choosing this option, you can trigger the device to accompany you into a 20-minute relaxing break.

All that data about your sleep is fun to pore over, but you can get the same data using a fitness tracker that is equipped with sleep tracking, such as the Jawbone UP24 (which costs $129.99), the Jawbone UP Move ($49.99) or the iFit Active ($65). The main advantage of using the Aura is that it may help you to fall asleep more smoothly and wake up more easily.