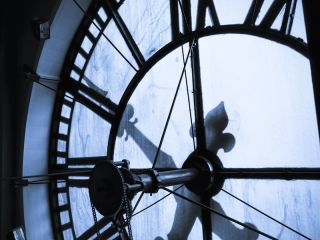 June 30 will be a second longer than any other day this year.

A "leap second" needs to be added in 2015 to make sure the time on atomic clocks stays in sync with Earth's rotational time, but some Internet companies are dreading the day.

Earth's rotation has been slowing down by about two thousandths of a second every day. But atomic clocks, which are now accurate up to quadrillionths of a second, don't change pace. While this situation isn't an immediate problem, it would eventually cause clocks to become so out of sync with Earth's rotation that they would read noon during the dead of night. [The Mysterious Physics of 7 Everyday Things]

"Earth is slowing down over geological time, and that can lead to a problem when you've got a ton of clocks," Demetrios Matsakis, chief scientist for Time Service at the U.S. Naval Observatory, told Live Science. "What do you do when the day gets longer?"

The solution that the International Earth Rotation Service (IERS) came up with is to add a second every now and then to keep the standard atomic time in sync with Earth's time. This year, the extra second is scheduled for the midway point in the year, at 11:59.59 p.m. Coordinated Universal Time (UTC) on June 30.

This will be the 26th leap second added to a calendar year since the practice began in 1972. In the past, the extra second has messed with computer systems. The last leap second was added in 2012, and it caused problems for big companies like Reddit, LinkedIn, Gizmodo and FourSquare.

The problem is that during the leap second, the computer clock shows 60 seconds instead of simply rolling over to the next minute, or shows the 59th second twice. The computer sees a leap second as time going backward, Matsakis said. The machine registers this as a system error, and the CPU can overload.

Google, to skirt the problem, will add a millisecond to its servers every once in a while throughout the year. This way, the slowed-down servers don't notice when an extra second is slipped in. Another good way to avoid any trouble is to simply shut down a computer system for an hour or two around the leap second, Matsakis said.

But many programmers are oblivious to leap seconds, and this can also cause problems. The additional seconds happen so infrequently and so irregularly that it makes it difficult for computer companies to catch on to the problem. While Reddit, LinkedIn, Gizmodo and FourSquare will likely remember the lesson they learned three years ago, other sites that didn't experience any issues are likely still "blissfully unaware," Matsakis said.

But the leap second could put more than just computer systems at risk. It's a little over-cautious, Matsakis admits, but he said he would not want to be on board a plane during a leap second. The extra second has been known to interrupt GPS receivers, which could be a problem for pilots.

The leap second is a more subtle correction than a leap year. The leap year rule (adding an extra day every four years in February) keeps the Gregorian calendar pretty close to the actual astronomical record of the passage of time. It does so by correcting for the 365.2422 days it takes for the Earth to travel around the sun, compared with 365 days, as humans have rounded this number to.

But Earth's rotation isn't perfect, and there are irregularities from year to year on the millisecond level. Every few years some fine-tuning is needed, and a leap second is added in June or December. This is why June 30 this year will have 86,401 seconds instead of 86,400.