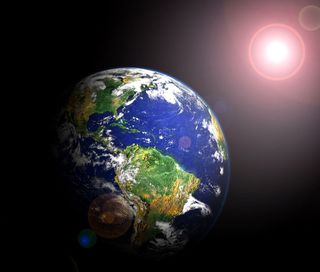 Earth completes its orbit around the sun every 365.2422 days.
(Image: © Alexey Repka | Shutterstock)

Most years, the calendar hops straight from Feb. 28 to Mar. 1. But in almost all years whose numerical value is divisible by four, such as 2012, an extra "leap day" gets tacked on the end of the second month. Cue, today's date: Feb. 29.

The extra day must be added to every fourth calendar year in order to keep our Gregorian calendar synchronized with actual astronomical measures of the passage of time. According to the National Institute of Standards and Technology (NIST), the length of Earth's year — as in the time it takes for the planet to complete one revolution around the sun — is not a clean 365 days, but rather 365.2422. Adding an extra day to one-fourth of calendar years compensates for the buildup of partial days.

However, because the astronomical year isn't exactly 365.25 days long, but a hair shorter, the normal leap year schedule is a slight over-compensation. To scale back the full-day leaps and keep the calendar right on track, some century years (years with double zeroes at the end) are not leap years. The rule dictates that only century years which are divisible by 400, such as the year 2000, contain leap days. The numbers 1900, 1800 and 1700 aren't divisible by 400, and so those years were not leap years. [Video: A Short History of the Modern Calendar ]

Altogether, the 400-year leap year cycle ensures that Earth is as close as possible to the same point in its orbit in consecutive calendar years. Any further errors that accumulate are corrected when needed through the addition of a leap second onto the last minute of either June or December. During leap seconds, the Coordinated Universal Time follows the sequence 23h 59m 59s - 23h 59m 60s - 00h 00m 00s.