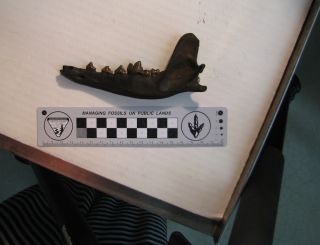 Ancient coyotes hunted large prey, and had larger jaws and sharper teeth to bring down their choice meals than modern-day coyotes do, a new study reports.

The fierce coyotes of the past (Canis latrans) likely ate the young of large animals that roamed North America during the Pleistocene epoch, including juvenile llamas, camels and horses. But climate change and, to a small extent, human hunters, likely killed off these large animals as the Pleistocene ended about 11,500 years ago.

As the average size of its prey shrank, so did the coyote's jaws, said the study's lead author, Julie Meachen, an assistant professor of evolutionary biology at Des Moines University in Iowa. [Caught! Young Cougars Trapped By Coyotes]

Competition with other predators may have also led to smaller jaws. A major competitor with the coyote was the larger dire wolf. Although these animals went extinct along with other large animals as the climate of the Pleistocene warmed — with temperatures increasing by 5 to 11 degrees Fahrenheit (3 to 6 degrees Celsius) — another large predator took the dire wolf's place.

The gray wolf migrated from Eurasia across the land bridge that once connected the lands across the Bering Strait, present-day Russia and Alaska. The gray wolf likely fought the coyote for dominance in North America.

"What probably happened is they met these coyotes who were still around, and since they (the gray wolves) were still bigger, they picked the big ones off," Meachen told Live Science.

The older jaws came from the Rancho La Brea Tar Pits in Los Angeles. Surprisingly, after dire wolves and saber-toothed cats, coyotes are the third most common animals in the tar pits, which contain the remains of many carnivores. "When a herbivore got trapped, it would bleat and scream, and it wouldn't be happy," Meachen said. "Those cries would attract all of the carnivores, who would dog pile it trying to get an easy meal."

The oldest coyote jawbones from the tar pits were thick and large with sharp teeth, and had less space for grinding plants. This suggests that these animals were adapted for eating meat and killing large prey, Meachen said.

Moreover, it's likely that coyotes once hunted like some dogs do today. Dogs with thick jaws are known to kill large prey by chasing it in packs and nipping the prey in the rear flank. "Then they pull back and they do this behavior over and over again," Meachen said. "And this wears the large prey down, and makes it easier for one of the dogs in the pack to bring it down."

The jaws from the tar pit dating to 10,000 years to 7,000 years ago are of intermediate size, and suggest that the coyote transitioned from a larger hunting machine to a smaller predator that eats small prey, such as rabbits and rodents, and that the teeth adapted to eat vegetation such as fruit, including pears and plums, Meachen said.

Meachen noted that scientists are not sure that modern-day coyotes are the direct descendants of the large-jawed animals from the Pleistocene. It's difficult to get DNA from ancient samples, so it's possible that rather than coyote jaws getting smaller over time, today's coyotes came from somewhere else.

For instance, when ancient pumas went extinct in North America, it was other subspecies of puma in South America that migrated north about 8,000 years ago to fill the abandoned niche, according to a 2013 study in the journal Genetics and Molecular Biology.

Still, the new findings on the coyote's jaw support other evidence that coyotes were once larger creatures. In a 2012 study by Meachen and her colleagues, the researchers found that coyote body size grew smaller over time.

The new study was published today (Dec. 31) in the journal PLOS ONE.