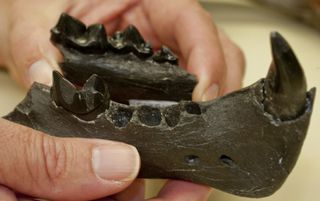 Lower jaw fossils of a 5-million-year-old saber-toothed cat (Rhizosmilodon fiteae), a smaller relative of the Smilodon species, have been found in Florida.
(Image: © Jeff Gage / University of Florida)

A new genus and species of extinct saber-toothed cat has been found in Polk County, Fla., scientists say.

The fossil, which is 5 million years old, is related to the well-known carnivorous predator Smilodon fatalis from the La Brea Tar Pits of Los Angeles. The group of saber-toothed cats called Smilodontini was thought to have originated in the Old World and later migrated to North America, but the new species' age suggests the group evolved in North America, researchers reported March 13 in the journal PLOS ONE.

Although Smilodon appears in the fossil record about 2.5 million years ago, there weren't many intermediate forms to tell scientists where it originated, according to study co-author Richard Hulbert Jr., vertebrate paleontology collections manager at the Florida Museum of Natural History.

"The new species shows that the most famous saber-toothed cat, Smilodon, had a New World origin, and it and its ancestors lived in the southeastern U.S. for at least 5 million years before their extinction about 11,000 years ago," Hulbert said in a statement. "Compared to what we knew about these earlier saber-toothed cats 20 or 30 years ago, we now have a much better understanding of this group."

Hulbert and colleagues discovered the fossils of the new cat, Rhizosmilodon fiteae, during the excavation of a phosphate mine in 1990. The species was named for Barbara Fite of Lutz, Fla., who donated a fossil of the species from her collection that had a very well-preserved lower jaw with all three chewing teeth. The name Rhizosmilodon means "root of Smilodon," because researchers believe the creature could be the direct ancestor of Smilodon, which went extinct 11,000 years ago.

The researchers did a comparative analysis of saber-toothed cat anatomy to determine its biological grouping. The animal's lower jaw and teeth were smaller than Smilodon's, about the size of a modern Florida panther, the results showed. [Image Gallery: 25 Amazing Ancient Beasts]

When alive, the panther-size cat would've lived alongside rhinos, tapirs, three-toed horses, peccaries, llamas and deer in a coastal forest. There, the researchers suspect, Rhizosmilodontook advantage of its small size to climb trees and hide captured prey from larger meat-eaters including packs of hyena-dogs and an extinct bear larger than today's grizzly.

The new cat was originally misidentified from a partial lower jaw fossil in the early 1980s as a member of the genus Megantereon. The cat is actually a sister species to Megantereon and Smilodon, but is older than either group. All three are called saber-toothed cats because of their long canine teeth.

"When people think of saber-toothed cats, they think of it as just one thing," Hulbert said, "when in fact, it was an almost worldwide radiation of cats that lasted over 10 million years and probably had a total of about 20 valid species."

The finding helps settle the debate over where saber-toothed cats first arose — in North America, rather than Eurasia.