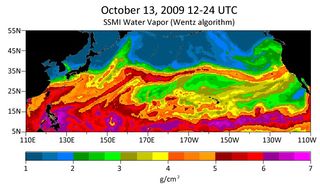 This image shows the river of moisture-laden air that brought widespread rains to California in 2009. Over a 24-hour period, 19 inches of rain fell along the state’s central coast.
(Image: © NOAA's Earth System Research Laboratory)

SAN FRANCISCO — A river of rain flowing from the tropics to California this month finally eased the Golden State's extreme drought, as storm after storm pushed precipitation levels in the region above normal for the first time in years.

Under current climate scenarios, such drought-busting "atmospheric rivers" will hit Northern California twice as often by 2100 as they do now, said U.S. Geological Survey hydrologist Mike Dettinger. "When the atmosphere is warmer, it holds more water vapor, so there is a huge increase in the number of these atmospheric rivers," Dettinger said here Wednesday (Dec. 17) at the American Geophysical Union's annual meeting.

But in Southern California, the number of atmospheric rivers will barely budge as 2100 approaches, suggest climate models that Dettinger has tested. However, the storms will become 10 to 20 percent more intense. "That's not good, because more rain means more flood risk," he said. "California's atmospheric rivers are every bit as big as land-falling hurricanes," Dettinger said.

Atmospheric rivers are long, narrow bands of water vapor that travel through the sky a mile above the ocean (1 to 2 kilometers). When the moisture-laden air runs into California's mountains, the air cools and water drops out as rain or snow. The rivers average about 250 miles (400 km) wide and can be from 1,240 to 6,000 miles (2,000 to 10,000 km) long. Not just California reaps the rainfall benefits: 90 percent of atmospheric water vapor transported outside the tropics moves through these narrow bands, from England to Antarctica. [Weirdo Weather: 7 Rare Weather Events]

Because California relies on atmospheric rivers for 30 to 50 percent of its yearly rain and snow (depending on the region), any change in the frequency or intensity of the huge flows can have a major impact on the state. In fact, the ongoing drought in California is partly due to a high-pressure ridge offshore of the West Coast, which diverted incoming storms and atmospheric rivers, according to weather experts. On the flip side, more than 80 percent of Northern California's floods are linked to atmospheric rivers, Dettinger said.

"We are finding more-frequent atmospheric rivers," Ralph said. Dettinger "is on the leading edge of looking at climate change and how it will affect them."

Although warmer temperatures could bring more moisture to Northern California, the heat will also affect mountain snowfall patterns, Dettinger said. Climate warming is projected to raise the elevation at which it's cold enough for snow to fall, increasing it by 1,970 feet (600 m), Dettinger said. That means that at lower elevations that typically received snow, more rain than snow will fall, which could spark more flooding.

Smaller winter snowpacks melt more quickly, leaving less meltwater in the late summer and early fall for thirsty trees and mountain meadows. The dew point for rain will also shift higher by about 650 to 985 feet (200 to 300 m), he said.