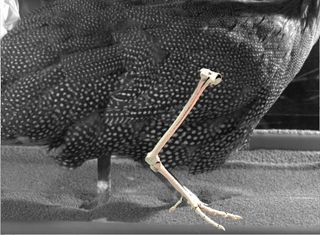 A composite image combines video and computer simulations showing the position of a guineafowl's foot as it sinks into a bed of poppy seeds. X-ray video enabled researchers to watch as the bird's footprint formed.
(Image: © Peter Falkingham)

A detailed X-ray video of a modern bird foot is revealing the secrets of dinosaur tracks set down more than 250 million years ago.

The ancient tracks, made by the chicken-size dinosaur Corvipes lacertoideus, contain strange features that are likely the marks made when the dino withdrew its foot from the sediment — a process that is impossible to document without X-rays that reveal what's below the sediments.

The new video "is the first time anyone has been able to see a footprint being formed," said study author Peter Falkingham, a research fellow at the University of London's Royal Veterinary College. [See X-ray Video of Footprint Formation]

Falkingham and his colleagues used X-rays to videotape a bird called a guineafowl (a relative of chickens and pheasants) as it walked through a soft bed of poppy seeds. The researchers could see the foot plunging into the seeds, just as a dinosaur foot might have sunk into soft sand or dirt.

Dinosaur prints are the only direct record of dinosaur movement, Falkingham told Live Science. But they are very tricky to interpret. A fossil print might come from the original land surface where the dinosaur stepped, or it might be an impression left over from several rock layers down, after the surface layer eroded away.

Prints are static impressions, Falkingham said, but a moving dinosaur foot is dynamic. Unlike celebrities carefully pressing their handprints into the cement on the Hollywood Walk of Fame, a walking dino didn't create an anatomically correct impression in the ancient soil. The dinos sank down, swept their toes through the dirt and flexed their foot muscles as they moved. Without an understanding of this process, scientists can only glean so much from dinosaur tracks.

Falkingham and his colleagues wanted to peer below the surface, second by second, as a track was being made. They chose guineafowl as their subjects because the birds are close in size to the dinosaur print fossils that the researchers wanted to use as comparisons. And, as birds, guineafowl are descendents of the avian dinosaurs.

"They are small dinosaurs without a tail, and that makes them a fantastic correlate for looking at the footprints produced by dinosaurs and produced by birds," Falkingham said.

In an X-ray machine, the birds trotted over solid surfaces and through dry poppy seeds, an analogue for sand or other soft sediment. Next, the researchers used computer simulations to model the movement of every single little poppy seed as the bird strode through.

The video provides a real-time look at how a footprint is formed — the first time anyone has been able to see what a bird's foot does in soft sediment, Falkingham added. The researchers found that the guineafowl's feet sank about 1.9 inches (5 centimeters) down into the poppy seeds, a depth that is almost equal to the length of the bird's feet. On the dry, granular surface, only an indistinct impression remained, more of a trench than a track.

But about 0.4 inches (1 cm) below the surface, the impression of the bird's foot was preserved in startling detail.

That preservation occurs because the poppy seeds balance against one another below the surface, rather than collapsing as they do up top, the researchers report today (Dec. 8) in the journal Proceedings of the National Academy of Sciences.

But this subterranean print was not a faithful reproduction of the bird's foot anatomy. The shape of the animal's claw changed as it moved through the seeds, first plunging low, then sweeping back. The toes entered the seeds spread wide, then clenched together as they retracted, like the clasper in a claw arcade game.

This movement left distinct impressions, mimicked in the Corvipes tracks from the Jurassic period in what is now the northeastern United States. By comparing the modern bird foot simulations with the real Jurassic tracks, Falkingham and his colleagues were able to see how mysterious ridges in the track formed.

"The simulation shows us that as the foot comes out, it comes out in the middle of the track and it pulls sediment upwards while it does so," Falkingham said. "So these are actually exit traces from the foot."

If they understand how tracks are formed, paleontologists can reconstruct how dinosaur feet moved, he said. The team next plans to search for hints to evolution in tracks, looking for alterations in motion as dinosaur bodies changed.

"Footprints often get a bit overlooked," Falkingham said. But as a record of motion, they provide information that bones cannot.

"It's a really cool thing," he said. "A dinosaur walked through here, and the way that its leg moved changes how the footprint looks."