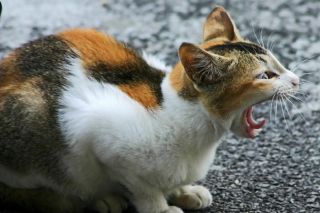 U.S. streets could soon be over-run with cats if communities fail to get a handle on growing feline populations, a veterinary medicine researcher says. The problem is growing numbers of not just strays, but also other free-roaming pet cats. The strays are likely to go unneutered or unspayed, and therefore to reproduce like mad. On top of that though, more than 38 million households own an estimated 88 million cats — that's about one cat for every 3.5 Americans. Those that aren't "fixed" often can and do still wander freely outdoors or get lost and make kittens. Fertile female cats produce an average of two litters of four to six kittens per year. As a result, up to 5 million U.S. cats are euthanized in shelters each year, according to estimates by the American Society for the Prevention of Cruelty to Animals. A coordinated action on the part of policymakers, shelter organizations and cat owners is needed to try to control cat overpopulation, said researcher Linda K. Lord, assistant professor of veterinary preventive medicine at Ohio State University. "If we don't change something, we're going to continue to lose this battle," Lord said. "We're going to have more and more cats reproducing, and we need to think about collective community approaches to prevent that."

One city is taking strong measures. A mandatory pet sterilization ordinance goes into effect this month in Los Angeles. Cats and dogs must be spayed or neutered by the time the animal is 4 months old. Service and breeder dogs are exempt. Cats have surpassed dogs as the most popular pet in the United States, according to a 2007–2008 National Pet Owners survey conducted by the American Pet Products Manufacturers Association. Feeding stray cats To figure out what people want to do to prevent a profusion of street cats, Lord analyzed data from a telephone survey done last year of 703 households of Ohio, a state where more people say they tend to feed roaming cats and the population of cats entering shelters is on the rise. The number of cats euthanized also is increasing, despite a stable human population. The study results showed that about a third of those surveyed see cats roaming the streets daily (which could include cats belonging to a neighbor, lost cats and strays). About a quarter of respondents feed roaming cats and about a quarter of those folks feed the cats daily. About a quarter of the stray-cat feeders took the animals to the vet for some kind of care, including spaying or neutering. The same percentage reported knowing the cats they fed had delivered at least one litter of kittens in the past year. "I was surprised by how many households were feeding cats," Lord said. "In an ideal world, if you're going to take the responsibility to feed a cat, which is going to make it viable longer, then it would be best to at least try to get the cat altered, so it's not adding to the numbers." The spay/neuter rate for cats among the surveyed owners ranged from an average of 75 percent in rural areas to 90 percent in urban areas, but "there is a huge population of cats that people provide some care for but don't consider their own," Lord said. The spay/neuter rate for those cats is much lower. The survey, detailed in the April 15 issue of the Journal of the American Veterinary Medical Association, also found that perceptions about the need to regulate the cat population in Ohio differs among rural and urban dwellers and among cat owners and people who do not own pets. It is reasonable to suggest that attitudes toward cat populations among those surveyed in Ohio might resemble those of people elsewhere in the country, she wrote in the journal, since Ohio is ranked seventh among states in human population and includes two of the 50 largest cities in the country. Who herds cats? The perception is that the government provides funding for the control of cats, but "by and large, that is not the case in Ohio," Lord said. "Government has tended to not want to be involved with cats. And I don't know if they can avoid it anymore." Most survey subjects approved of a "trap-neuter-return" approach, which relies on volunteers to trap colonies of wild cats, oversee spaying or neutering at a veterinary clinic, usually at low cost, and then returning the cats to their outdoor haunts with some mark that indicates they've been "fixed" (often a tiny tip of one of the cat's ears is clipped off). Trap-neuter-return programs are one piece of the puzzle and work for the wild or feral cats, Lord said, but they don't deal with the other free-roamers. In the past, much of the cat overpopulation burden has fallen onto humane societies, and "I don't know if they have resources by themselves to do it," she said. "I think that it is going to take a partnering." It's important also to make sure all owned cats have tags or implanted microchip IDs, so neighbors can tell that free-roaming cats "are somebody's," Lord said. More about cats Other cat stats in Ohio: - 60 percent of subjects owned pets, and 31 percent owned cats. - Two out of three subjects said they like or love cats. - About 40 percent of owners allow their cats to go outdoors. - Half of survey respondents think laws should prohibit owners from letting cats roam outdoors (only one third of cat owners agree with this). - 60 percent support spay-neuter laws for cats. - 48 percent support using tax dollars to subsidize spay-neuter programs. - Three quarters supported mandatory identification for all owned cats. - 88 percent supported laws requiring rabies vaccines for cats. Here are Lord's tips for owners nationwide: Make sure pet cats, along with those you feed but don't own, are spayed and neutered. Be willing to support ways to work with local government, veterinary groups and shelters to figure out how to address the problem of free-roaming cats. "It gets very emotional but I think groups have to work together to recognize there is not one solution that is going to work in every community," Lord told LiveScience. "Some of it is elevating the status of cats," she said. They are less likely to be tagged or carry other ID markers. They are hardly ever reunified with owners, if lost, and "they get less veterinary care, according to the American Veterinary Medical Association," she said. "Vet visits for cats is lower than that for dogs, the frequency of going. Is that because they are healthier? I'm not sure we can make that assumption."