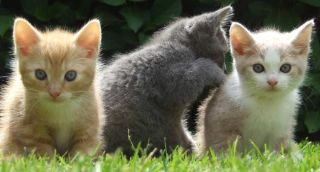 Droves of cats and kittens are swarming into animal shelters nationwide, and global warming is to blame, according to one pet adoption group.

Several shelters operated by a national adoption organization called Pets Across America reported a 30 percent increase in intakes of cats and kittens from 2005 to 2006, and other shelters across the nation have reported similar spikes of stray, owned and feral cats.

The cause of this feline flood is an extended cat breeding season thanks to the world’s warming temperatures, according to the group, which is one of the country’s oldest and largest animal welfare organizations.

“Basically, there is no longer a reproduction lull with cat breeding cycles, and unfortunately, it seems more people are bringing boxes of kittens into our agencies during winter now,” she added.

Studies have shown that global warming is altering the breeding seasons of other animals, such as migratory birds and penguins.

One possible solution to stem the tide of cats is to make sure pets are spayed or neutered.

“We have long discussed the benefits of spaying and neutering cats,” said Pets Across America Vice President Bob Rhode. “It is likely that global warming is probably not going to be slowing any time soon, therefore, it benefits everyone when pet owners take action and spay and neuter their pets.”