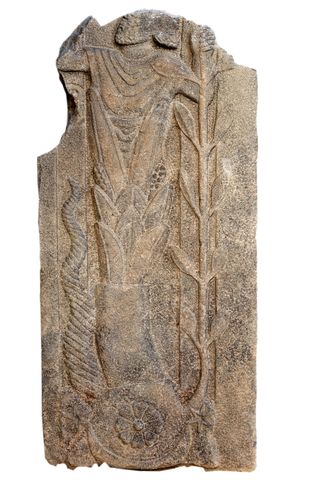 An unknown Roman god was recently unearthed at a sanctuary in southeast Turkey. The god, who is emerging from a plant, is depicted with both Near Eastern and Roman elements, and may have been a baal, or subdeity, of the temple's major god, Jupiter Dolichenus
(Image: © Peter Jülich)

A sculpture of a mysterious, never-before-seen Roman deity has been unearthed in an ancient temple in Turkey.

The 1st century B.C. relief, of an enigmatic bearded god rising up out of a flower or plant, was discovered at the site of a Roman temple near the Syrian border. The ancient relief was discovered in a supporting wall of a medieval Christian monastery.

"It's clearly a god, but at the moment it's difficult to say who exactly it is," said Michael Blömer, an archaeologist at the University of Muenster in Germany, who is excavating the site. "There are some elements reminiscent of ancient Near Eastern gods, as well, so it might be some very old god from before the Romans." [See Images of the Mysterious Roman God]

The ancient Roman god is a complete mystery; more than a dozen experts contacted by Live Science had no idea who the deity was.

The temple sits on a mountaintop near the modern town of Gaziantep, above the ancient city of Doliche, or Dülük. The area is one of the oldest continuously settled regions on Earth, and for millennia, it was at the crossroads of several different cultures, from the Persians to the Hittites to the Arameans. During the Bronze Age, the city was on the road between Mesopotamia and the ancient Mediterranean.

In 2001, when Blömer's team first began excavating at the site, almost nothing was visible from the surface. Through years of painstaking excavation, the team eventually discovered the ruins of an ancient Bronze Age structure as well as a Roman Era temple dedicated to Jupiter Dolichenus, a Romanized version of the ancient Aramean sky or storm god, who headed the Near Eastern pantheon, Blömer said.

During the second and third centuries A.D., the cult of Jupiter Dolichenus became a global religion likely because many Roman soldiers were recruited from the area where he was worshipped, and those soldiers took their god with them, said Gregory Woolf, a classicist at the University of St. Andrews in Scotland, who was not involved in the excavation.

After the temple was destroyed, medieval Christians built the Mar Solomon monastery on the foundation of the site, and after the Crusades, the site became the burial place of a famous Islamic saint.

Blömer's team was excavating one of the old buttress walls of the Mar Solomon monastery when they discovered the relief, which had been plastered over.

The relief depicted a bearded man rising up out of a palm-type plant while holding the stalk of another. The bottom of the relief contains images of a crescent, a rosette and a star. The top of the relief was broken off but when it was complete it would have stood about the size of a human being.

"It was quite a big surprise when we saw the relief coming out of in this area of the site," Blömer told Live Science.

The mysterious deity may have been a Roman spin on a local Near Eastern god, and the agricultural elements suggest a connection to fertility. But beyond that, the deity's identity has stumped experts.

The relief shows some elements associated with Mesopotamia. For instance, the rosette at the bottom may be associated with Ishtar, while the crescent moon at the base is a symbol of the moon god Sîn, Nicole Brisch, a Near Eastern studies expert at the University of Copenhagen in Denmark, wrote in an email. (Brisch was not involved in the current excavation.)

"The bottom bits are from the Near East and the top bits are classical," Woolf told Live Science. "He looks to me like he was somebody from a native, very local pantheon." [Images: Ancient Carving of Roman God]

The fact that he is rising out of a plant is reminiscent of the birth myths of some gods, such as the mystery cult god Mithras, who was born from a rock, or the Greek goddess Aphrodite, who was born out of sea foam, Woolf speculated.

Though the gods' identity is a mystery, the hybridization of gods isn't unusual for the time, Woolf said.

"When the dominant style in the area is Greek and Roman, they give their gods a face-lift," Woolf told Live Science.

For instance, the ancient Egyptian gods end up wearing the clothes of Roman legionaries, and ancient Mesopotamian gods, which were typically depicted as "betels" — stones or meteorites — get human faces, Woolf said.

The best chances of identifying this enigmatic deity is to find a similar representation somewhere with an inscription describing who he was, Woolf said. But getting the word out could also help. Sometimes findings get widely disseminated and "someone turns up a little object that they've had in their private collection and say, 'Do you know, I think this is the same person,'" Woolf said.