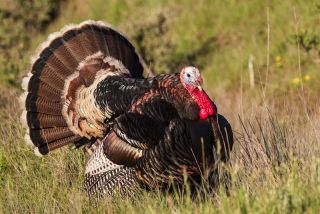 Thanksgiving is just around the corner, and as households across the country prepare to serve up mouthwatering feasts, the famed bird at the center of these festivities deserves its time in the spotlight. From their ability to fly to their strange use of stones to break down food, here are six fun facts about turkeys.

Because turkeys look so big and awkward, it may seem unlikely that these birds can take to the skies — especially considering how fast they can fly. Over short flights, a wild turkey can top out at about 55 miles per hour (89 km/h), according to the National Wildlife Federation. Domestic turkeys (Meleagris gallopavo), however, can't fly because they are too heavy. These birds have being fattened up over generations for the holiday dinner table. [Thanksgiving: 10 Tips for Sticking to Healthy Portions]

Examining a turkey's droppings can tell you if a male or a female bird passed through the area. The feces of male turkeys are J-shaped, and also straighter and larger than a female's, according to the state of Georgia's wildlife resources division. Hen droppings, on the other hand, look more like a spiral.

Wild turkeys can get up trees

Usually turkeys are spotted eating acorns and other foods close to the ground, which makes it hard to picture them all the way up a tree. But, that's where they prefer to sleep, because their eyesight is so poor, according to the Indiana Department of Natural Resources. Turkeys typically begin their roost at dusk and return to the ground at first light.

The tops of male turkeys are not only colorful, but highly variable. While males normally have almost no feathers on their heads, when it comes time to breed, the colors on their noggins can change between red, white and blue — sometimes within seconds, according to the National Wild Turkey Federation. Generally, the rest of a gobbler's body is green, bronze, gold and red (good for attracting mates), while hens are typically brown or grey (good for hiding, especially while on the nest).

Turkeys use stones for digestion

This part of the turkey may not be so digestible at Thanksgiving: When eating, turkeys ingest small stones that go into a part of their stomachs called the gizzard, which helps the turkey break down food. This process is necessary because turkeys, like all birds, don't have teeth.

In fact, turkeys have two stomachs: the glandular stomach that softens the food with gastric juices, and the gizzard that grinds it up for the intestines or the first stomach, if needed.

There's a reason that male turkeys are called "gobblers" — they're the only ones that make that noise! Each gobbler has a unique call that he uses to attract females during breeding season. Female turkeys also make distinct noises, but they sound more like chirps and clucks.