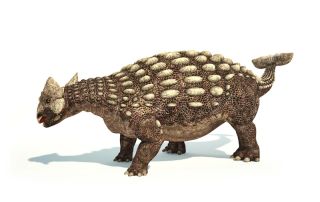 Carrying around an exoskeleton of bony armor is hard work. But armored ankylosaurs figured out a way to shoulder the load and stay cool. These Cretaceous dinosaurs had "Krazy Straw" nasal passages that helped them air-condition their brains, according to a new study.

"These heads are just covered with bone — they just look like rocks with eyes. And yet, when you look inside, they have these noses that go all over the place," said Jason Bourke, a doctoral student at Ohio University who is presenting his findings on ankylosaurus noses today (Nov. 8) at the annual meeting of the Society for Vertebrate Paleontology in Berlin.

Bourke and his colleagues were intrigued by the "roller-coaster" paths taken by the nasal passages of tanklike ankylosaurs, which become well-preserved fossils because they are so bizarrely bony. The convoluted airways are flanked by small tunnels where blood vessels would have run, suggesting that the setup may have had to do with heat exchange, Bourke told Live Science. [Paleo-Art: Dinos Come to Life in Stunning Illustrations]

Ankylosaurs and other large dinosaurs had small brains, which were at risk of overheating easily, Bourke said. If cool air from the nose could cool the blood in the head, it might help prevent the brain from sweltering, he added.

To test the idea, the researchers used CT scans of two armored dinos to create virtual models of their heads. The first was Panoplosaurus mirus, a behemoth of nearly 2 tons that lived about 76 million years ago. The second was Euoplocephalus tutus, an even bigger animal with spiky armor plates and a clublike tail.

The researchers used the virtual heads to simulate air flow in and out of the dinosaurs' nasal passages, and found that when cool air at a temperature of 59 degrees Fahrenheit (15 degrees Celsius) passed through the blood-rich passages, the act of breathing warmed it to 95 F (35 C) before it left the throat. This process would have cooled the blood near the nasal passages by about 32 F (18 C), Bourke said. That cooled blood would have then bathed the brain, preventing overheating.

The dinosaurs were also able to cool their exhaled air, saving moisture and 50 to 70 percent of the energy used to heat the air in the first place, Bourke added.

Euoplocephalus, which had a more convoluted nasal passage, was more efficient at this process than Panoplosaurus, he said, probably because Euoplocephalus was a bigger animal and was thus at more risk of overheating.

The airway discovery is interesting, Bourke said, because most modern mammals and birds have their own method for warming air headed to the lungs and for cooling exhaled air: They have respiratory turbinates, or blood-rich structures in the nasal cavity that warm and humidify the air coming in.

"This is the first time we've been able to show that an animal that doesn't have these turbinates found another way around heating the air up or cooling it down, just by making the airway superlong and then curling it around," Bourke said.

Duck-billed dinosaurs, or hadrosaurs, have similarly loopy noses, he said, which have been linked with helping the dinos create resonant bellows. It's very likely that, in both hadrosaurs and ankylosaurs, the structures served a dual purpose: warming and cooling air, and amplifying sounds, Bourke said.

"If they made sound, at least, it probably was going to be enhanced by having this crazier nose shape," he said.