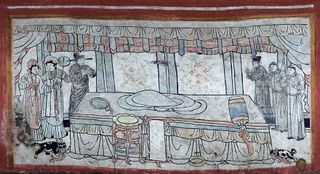 On the north wall of a 1,000-year-old tomb found recently in Datong City, in northern China, a mural shows shows a cat, dog and attendants in a bedroom with an empty bed. Exactly who occupied the tomb is a mystery -- no human remains were found.
(Image: © Photo courtesy Chinese Cultural Relics)

A 1,000-year-old tomb with a ceiling decorated with stars and constellations has been discovered in northern China.

Found not far from a modern day railway station, the circular tomb has no human remains but instead has murals which show vivid scenes of life. "The tomb murals mainly depict the daily domestic life of the tomb occupant," and his travels with horses and camels, a team of researchers wrote in their report on the tomb recently published in the journal Chinese Cultural Relics.

On the east wall, people who may have served as attendants to the tomb's occupant are shown holding fruit and drinks. There is also a reclining deer, a crane, bamboo trees, a crawling yellow turtle and a poem. The poem reads in part, "Time tells that bamboo can endure cold weather. Live as long as the spirits of the crane and turtle."

The tomb's ceiling contains stars painted in a bright red color. The "completed constellations are formed by straight lines connecting the stars in relevant shapes and forms," the researchers wrote.

Archaeologists also found a small statue of the occupant. The statue is 3.1 feet (0.94 meters) tall, and shows a smiling man who is wearing a long black robe while sitting cross-legged on a platform. It could be that the statue was used as a substitute for the body in the burial, the researchers said, noting this practice wasn’t unusual among Buddhists at the time.

The tomb was found in Datong City and was excavated in 2011 by a team from the Datong Municipal Institute of Archaeology. The researchers reported their finds, in Chinese, in the journal Wenwu, and their article was recently translated into English and published in Chinese Cultural Relics. The excavation team was led by Junxi Liu.

The tomb was robbed in the past and the name of the tomb owner has not survived. Judging by his statue, and the decoration of his tomb, researchers said it's likely that the occupant was a Han Chinese man of some rank and wealth.

Historical records indicate that the Khitan ruled a multicultural empire that incorporated Han Chinese into the government.

"The Khitan system of rule worked on a principle of dual administration, with its nomadic, pastoral, and mostly Khitan subjects in the north under the northern government and its agricultural, sedentary, and largely Chinese and Bohai subjects in the south under the southern government," writes Nicola Di Cosmo, a historian at the Institute for Advanced Study, in a chapter of the book "Gilded Splendor: Treasures of China's Liao Empire" (Asia Society, 2007).

Although we may never know the identity of the tomb occupant, or the position he held, this unknown man has left behind a colorful tomb full of life.

Chinese Cultural Relics is a new journal that translates Chinese-language articles, which were originally published in the journal Wenwu, into English. The mural tomb was included in its inaugural issue.