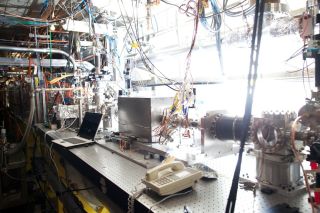 Scientists at the SLAC NAtional Accelerator Laboratory demonstrated a method of accelerating particles that may fuel the development of tiny but powerful atom smashers in the future. The plasma accelerator (shown here) generates electric fields that can transfer energy from one group of electrons to another, boosting the second bunch of electrons to ultrahigh collision energies.
(Image: © SLAC National Accelerator Laboratory)

Move over Large Hadron Collider. A new atom smasher could one day slam particles into each other at even more mind-bogglingly high-energy levels than the massive underground ring near Geneva, Switzerland.

The new system, called a Wakefield accelerator, could allow scientists to make tiny but powerful particle colliders that could fit on any university campus. That, in turn, could make it feasible to look for as-yet-unknown subatomic particles lurking in the universe.

The new accelerator was described today (Nov. 5) in the journal Nature.

The premise behind all particle colliders is deceptively simple: Take a bunch of subatomic particles such as protons or electrons, make them crash into one another at incredibly high speeds, and then look at the wreckage to see what comes out, said study co-author Mark Hogan, a physicist at the Stanford Linear Accelerator, or SLAC National Accelerator Laboratory in Menlo Park, California. [Images: Inside the World's Top Physics Labs]

But accelerating protons or electrons to near the speed of light is no simple feat. Because the particles are so tiny, the beams of particles need to be incredibly focused to ensure enough collisions to detect fleeting, ultrarare particles.

Very strong electric fields must nudge the particles to higher and higher speeds. The particle beams also need either the very long runway of a linear accelerator to gather speed, or they must bend around a circular track repeatedly, which can cause particles to spray off from the electron or proton beams, reducing the beam's tight focus.

To find the most elusive particles, such as the Higgs boson particle detected in 2012 at the Large Hadron Collider (LHC), colliders have gotten bigger and have gobbled up more power. This drive for ever-bigger colliders led to the construction of the LHC, a massive machine on the border between Switzerland and France where protons whiz around a 17-mile (27 kilometers) underground loop before crashing in collisions that generate 8 teraelectron volts (TeV) of energy. The LHC is currently shut down for an upgrade and is scheduled to reopen next year with the ability to generate collisions with about twice the energy as before the upgrade. [Beyond Higgs: 5 Elusive Particles That May Lurk in the Universe]

"We've reached a limit on what we can realistically afford to build in terms of size and cost," Hogan told Live Science.

Colliders can now use as much energy as municipal power stations, Hogan said. For instance, the European Organization for Nuclear Research (CERN), which runs the LHC, uses enough power to run about 300,000 homes.

So Hogan and his colleagues began searching for a way to boost collider energies without dramatically scaling up in power and size.

The team created a plasma of hot lithium gas — essentially a soup of atoms with electrons stripped off — in an 11.8-inch long (30 centimeters) chamber.

The team then shot two bursts of tightly focused electrons traveling at near the speed of light into the plasma, "like a machine gun, one after another," said study co-author Michael Litos, who is also a physicist at the SLAC National Accelerator Laboratory.

Because particles of like charge repel each other, the first bunch of electrons pushes the electrons in the plasma out of the way, while the bigger lithium ions are too massive to move and stay in place. These lithium ions then pull the plasma electrons back into place, creating a bubble like the "wake around a boat," Hogan said. The movement of electrons also generates a huge electric field inside the wake.

The new demonstration is an important milestone, said Thomas Katsouleas, the dean of the Pratt School of Engineering at Duke University, who was not involved in the current study.

While early plasma experiments doubled the energy of accelerating electrons, "only a few particles were accelerated to this maximum energy, and there was no well-defined accelerated beam," Katsouleas told Live Science.

The current experiment successfully accelerated half a billion electrons and kept them tightly focused.

In the future, multiple bunches of electrons could be shot through a plasma field, with each bunch transferring energy to the electrons behind it. That strategy could pave the way to arbitrarily powerful colliders that would fit in the basement of any hospital or university, Hogan said.

The method could also be used to supercharge conventional colliders.

"Because the plasma wave accelerated electrons 500 times faster than SLAC's main particle accelerator, the result might herald a new generation of compact 'plasma afterburners' that could boost the energy of conventional particle accelerators and potentially reduce the skyrocketing cost of high-energy physics machinery," Mike Downer, a physicist at the University of Texas at Austin, wrote in an accompanying article in Nature.