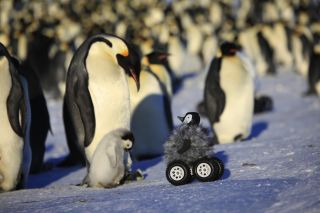 Imagine you're a field biologist who studies penguins. You go all the way to Antarctica. You finally get up close to a noisy, smelly colony of the birds. But once they see you, they start to freak out. Some retreat with their eggs, and in the process, they encroach on their neighbors' turf. Now the penguins are fighting. The social order of the colony is disrupted. You've tarnished the data you were trying to collect about penguin behavior.

How do you solve the problem of being a human in penguin territory? Perhaps you bring in cute robots. Rovers — especially ones that are disguised as penguin chicks — seem to be better at spying on penguins than humans are, according to a new study. (A video of the rover-penguin interaction might attest to the birds' curiosity about the rolling bot.)

A team of scientists tested how penguins reacted to an approaching human and an approaching rover that resembled a remote-controlled car. Their first subjects were 34 king penguins (Aptenodytes patagonicus) in the "Baie du Marin" colony at Possession Island, a sub-Antarctic island in the southern Indian Ocean. [See Photos of Baie du Marin Penguins]

The team also studied 158 famously shy emperor penguins (Aptenodytes forsteri) in the Pointe Géologie colony in Antarctica. When the plain-looking rover approached, about a quarter (28 percent) of the birds were wary and alert, and researchers stopped the tests. But nearly half (47 percent) of the penguins were quite nonchalant about the rover, displaying no reaction at all. Another quarter (25 percent) of the birds actually seemed curious, getting close to the rover and investigating it.

The birds were even more receptive to a rover that was disguised to look like a baby penguin. All adult and chick emperor penguins allowed it to approach close enough for the rover to read their electronic identification tags. Some chicks and adults even vocalized at the fake chick.

The researchers, who were led by Yvon Le Maho of the French National Centre for Scientific Research, also did some pilot studies on southern elephant seals (Mirounga leonina). These creatures allowed the rover to get close to their heads and tails (the spots where they are typically tagged) and their head. This is notable, the researchers said, because elephant seals usually react quite strongly when humans try to get close.

The findings were published in the journal Nature on Sunday (Nov. 2).