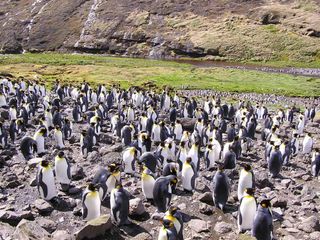 The researchers aren't sure if the king penguins are acclimating to humans and so don't get stressed when in their presence or if human presence weeded out those stress-sensitive penguins, leaving the copers behind.
(Image: © Vincent Viblanc)

Scientists studying king penguins on a sub-Antarctic island, along with tourists, may be stressing the waddling, flightless birds, new research suggests. However, it seems the penguins are getting used to their human visitors.

The new study reveals how more than 50 years of human presence, or the time since a permanent research station was set up, on Possession Island, has impacted a major colony of breeding king penguins (Aptenodytes patagonicus), called the "Baie du Marin" colony. Research reported last year on these penguins found that flipper tagging was linked with fewer chicks and a lower survival rate for the birds compared with untagged king penguins.

Turns out, according to the new study, penguins that are used to humans being around didn't get too upset by noise and human-presence stressors, though capturing these penguins for scientific measurements did cause a stress surge, according to the study published this week in the journal BMC Ecology. [See Photos of Baie du Marin Penguins]

"A central question for ecologists is the extent to which anthropogenic disturbances (e.g. tourism) might impact wildlife and affect the systems under study," lead researcher Vincent Viblanc of the University of Lausanne in Switzerland said in a statement. "One of the major pitfalls of such research is in forgetting that, from the perspective of the wildlife studied, tourism and scientific research are not two worlds apart."

In some ways, this island is perfect for studying stress in penguins. That's because some parts of the Baie du Marin colony have been exposed more intensely to humans than others, Viblanc told LiveScience. In disturbed parts of the colony scientists and tourists, sometimes in groups of tens, come into the presence of the penguins. A small number, about 50 birds, in this area are captured and handled by scientists one to five times each year. Meanwhile, another part of the colony is relatively undisturbed, Viblanc said, with one to two visits per week by scientists.

Viblanc and his colleagues compared 15 breeding penguins in these disturbed areas with 18 undisturbed penguins. All of the penguins were brooding a chick between 2 days and a month old.

To get a sense of the penguins' stress levels, the researchers measured their heart rates in response to three stressors: two low-intensity stressors that included a human approach to about 33 feet (10 meters) and a loud noise, meant to mimic tourists, scientists and noises from machines operating on the outskirts of the colony. The high-intensity stressor involved capturing a penguin to simulate what happens when scientists take direct measurements.

Compared with penguins from undisturbed areas, the disturbed penguins were less stressed by noise and approaching humans; the increase in heart rate above resting levels was much lower, 81 percent and 74 percent lower, in birds used to humans when they heard stressful sounds and saw humans approaching, respectively.

However, following capture, the human-acclimated penguins' maximum relative heart rate increased 42 percent higher than it did for undisturbed birds, though it recovered faster afterwards.

"Penguins habituate to the distant presence of human observers in disturbed areas, whereas they do not habituate to being captured," Viblanc wrote in an email to LiveScience. "This makes sense, as from an adaptive perspective, stress responses enable the organism to deal with life-threatening situations. Captures may indeed be assimilated as predation events from the birds, whereas the distant presence of observers poses no immediate threat."

Their findings can't tease out whether the lower heart-rate numbers in the highly disturbed areas are a result of penguins becoming habituated to human presence or if they are the result of a selection process. For instance, have penguins whose "animal personalities" are more susceptible to stress deserted these areas, leaving behind those that are better at coping, the researchers wonder.

Editor's Note: This article has been updated to clarify how much the penguins' heart rates increased upon capture.