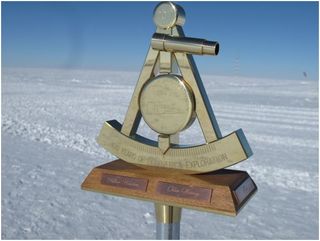 This winter marks the 100th anniversary of the race to the South Pole. After crossing Antarctica — the coldest, windiest, driest continent on Earth — the Norwegian explorer Roald Amundsen and his team arrived at the geographic South Pole on Dec. 14, 1911, the first people in history to reach the bottom of the Earth.

About one month later, on January 17, 1912, the British explorer Navy Captain Robert Falcon Scott and his party arrived at the South Pole to discover that Amundsen had beaten them there. Sadly, Scott died on the ice while attempting to return from the Pole. Nevertheless, the work of the Scott team on their trek to and from the Pole — including hauling 35 pounds of rock and fossil specimens on their return journey — helped lay the foundation for modern Antarctic science.

If Amundsen and Scott could somehow magically be transported back to the South Pole now, they would probably be amazed and honored to discover that the National Science Foundation's Amundsen-Scott South Pole Station, a massive, two-story, science-support structure, overlooks the spot they worked so hard to reach. Nearby is a 10-meter radio telescope that is currently being used to study the nature of mysterious dark matter. Below the surface of the ice sheet ice is a cube-shaped detector — a kilometer on each side — searching for elusive subatomic particles called neutrinos.

Amundsen-Scott is one of three year-round stations operated by the U.S. Antarctic Program, which is managed by the National Science Foundation under terms of Presidential Memorandum 6646. The other stations are McMurdo Station on Ross Island and Palmer Station on Anvers Island in the Antarctic Peninsula Region.

Forbidding though Antarctica is, the Amundsen-Scott South Pole Station, McMurdo Station and Palmer Station are nevertheless irresistibly inviting to scientists because Antarctica supports a cornucopia of fantastic life forms, geologic wonders, and marine and atmospheric conditions that are found nowhere else on Earth.

For example, researchers are studying adaptations that enable various life-forms — from microorganisms to penguins to seals — to survive in Antarctica; research into those adaptations may ultimately benefit human health. Researchers are even looking at the living and working conditions of research teams already in Antarctica to get a better understanding for how people can survive in such extreme ecosystems.

Some Antarctic species, despite their adaptations, are under particular stress. The retreat of sea ice in some parts of Antarctica are critically affecting two penguin species with particularly restricted ranges, and recent warming of water temperatures may be influencing the proliferation of undersea giants, including extremely large sea stars, jellyfish and sea spiders.

Scientists are also investigating global changes for which Antarctica provides an ideal study site, such as the current state of our planet's ozone layer, which protects us from ultraviolet radiation, and the impacts that are emerging as global climate changes. Observations of Antarctica's response to a warming globe — such as ocean acidification and the calving of glaciers off of continental ice sheets — are important for understanding such factors as the effects of ice retreat on global sea level and, more broadly, serve as bellwethers for the planet as a whole.