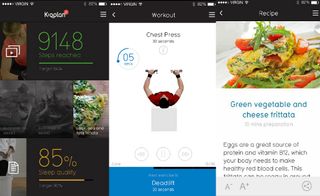 If you want your fitness tracker to do more than just count your calories and steps, a new coaching program called KiQplan could help you do just that.

KiQplan is an app that takes data from your fitness tracker or smartphone apps, and uses it to build a 12-week personal fitness plan to help users achieve a specific goal, such as losing weight, according to Fitbug, the maker of KiQplan.

KiQplan tells you how much exercise and sleep you should aim to get, and which nutrients you need more or less of. It also includes specific workouts, meal recipes and other tips to help you achieve those goals, Fitbug said. The targets are set each week based on the plan you chose, and are adapted according to your progress. [Bored with Your Fitness Tracker? Better Devices Are on the Way]

"KiQplan[s] are designed to take the 'so what?' out of activity tracking to provide structured action plans," Paul Landau, CEO of Fitbug, said in a statement.

Although Fitbug makes its own fitness tracker, KiQplan will work with a number of other popular fitness trackers, such as those made by Jawbone, Nike, Misfit and Withings, the company said. KiQplan can also integrate with other apps, such as MyFitnessPal and RunKeeper.

Users can purchase the $19.99 plans as a gift card, which will be on sale at Target starting Nov. 9. The gift cards will be rolled out to other stores in the following weeks, a spokesman for the company said.

People can also download KiQplan plans at the Apple App and Google Play stores, or on the program website.

More plans will be available in 2015, including plans for beginning runners and women in the third trimester of pregnancy, the company said.