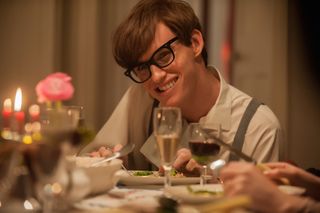 For most people, the name Stephen Hawking calls to mind the brilliant, wheel chair-bound physicist and his renowned theories about space-time and black holes. But a new film depicts a different side of Hawking: his relationship with his first wife, and his battle with a brutal disease.

"The Theory of Everything" tells the story of Stephen Hawking's life with Jane Hawking, and his struggle with motor neuron disease, or ALS. The movie reveals how the couple's bond allowed Hawking to persist in the face of increasing disability, and develop the theories that made him so famous.

The movie is not a biopic of Hawking's life — it's a portrait of a relationship, said director James Marsh.

Of course, Hawking's illness plays a huge part in that relationship, Marsh told Live Science. "It's like a bomb that goes off in a family — it resonates across all the people that have contact with that family." ['Theory of Everything': The Love Story of Stephen and Jane Hawking]

Based on Jane Hawking's memoir "Travelling to Infinity: My Life with Stephen" (Alma Books, 2008), the film weaves together the story of Stephen and Jane's marriage, with that of his illness and his pursuit of a "theory of everything."

The film begins when Hawking is a graduate student in physics at Cambridge University in England, where he meets and falls in love with Jane. But the couple's dreams are shattered when Hawking finds out he has motor neuron disease (also known as ALS or Lou Gehrig's disease), a progressive neurological disorder that attacks the neurons that control the muscles.

Actor Eddie Redmayne gives a convincing performance as Hawking, an able-bodied and rakish young man who, as the film goes on, undergoes a steady physical decline, losing the ability to walk, feed himself and ultimately even speak.

"When I got the part, the stakes felt pretty high," Redmayne told reporters at a press event. "Firstly, you're depicting a living human being who is also an icon, and telling his family story. And secondly, you're representing a brutal disease," he said.

To prepare for the part, Redmayne spent four months visiting patients at an ALS clinic in London. He also studied photographs and a video of Hawking in zero gravity.

It was a lot of "trying to work out what [Hawking's] decline would have been, and working with a dancer to access muscles that I haven’t used before to try and put that in my body," Redmayne said. "And then, just a lot of time in front of a mirror by myself."

The actor even put together a chart of the disease's progression, to refer to while filming each scene.

To show Hawking's weight loss over the course of the disease, Redmayne wears tight costumes in the beginning of the film, and looser ones as the film goes on. An oversized wheelchair and clever camera angles also help to produce the appearance of physical frailty.

Redmayne worked with a vocal coach to reproduce Hawking's garbled speech, and the actor seems to have mastered the use of his eyebrows and a few other facial muscles to communicate the way Hawking does later on in his illness.

The film is just as much about Jane Hawking as it is about Stephen.

Played by actor Felicity Jones, Jane is not only Hawking's lover and wife, and the mother of their children, but she also takes on the role of his caregiver. To inhabit the role, Jones read Jane's book and met with Jane herself.

"What I loved about her was the combination of this quite petite woman who's very ladylike, who's very well-spoken, but within her was this formidable, Grecian strength," Jones told reporters.

Jones and Redmayne worked hard to recreate the dynamic between Jane and Stephen.

"When Stephen is in the electric wheelchair, Jane becomes his body… when Stephen has a tracheotomy and can no longer speak, Jane's almost having to read his mind," Jones said.

The film reveals how much responsibility Jane took on in caring for Hawking, while raising their three children and pursuing her own career. It's she who pushes Hawking to go on, even if it means he will lose the ability to speak on his own.

But caring for Hawking took a toll on Jane, and Hawking developed an interest in his nurse, Elaine Mason. The couple got divorced in 1995, though they remain friends. The film depicts the divorce and Hawking's remarriage to Mason, and Jane's remarriage to Jonathan Hellyer Jones, a friend and helper to the family. But it doesn't include Hawking's divorce from Mason in 2006.

Despite the tragic circumstances the Hawkings face, the film's overriding message is one optimism. After all, as Hawking himself said, "However bad life may seem, there is always something you can do, and succeed at. While there's life, there is hope."