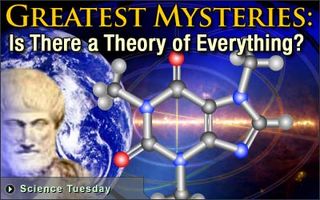 Greatest mysteries: Is there a Theory of Everything?

Ancient philosophers thought wind, water, fire and earth were the most basic elements of the cosmos, but the study of the small has since grown up. Physicists continue to carve the known universe into particles to describe everything from magnetism to what atoms are made of and how they remain stable.

Yet striking similarities in the world of quantum mechanics, as the study of particles and their forces is known, has led to a one of the most important questions in modern science: Is there a single theory that can describe everything?

"We understand a lot about the universe up to the first few energetic microseconds, but earlier than that our physics break down," said Mark Jackson, a theoretical physicist at Fermilab in Batavia, Illinois. "But those first moments are where the really interesting things happened."

If a theory can be designed to withstand the incredible energies of the early universe as well as incorporate gravity, Jackson said, then a universal theory of physics could become a reality.

The "standard model" of physics views particles as infinitesimal points, some of which carry basic forces. In spite of the fact that it fails to include gravity and becomes gibberish at high energies, the time-tested theory is the best tool scientists have for explaining physics.

"You hear people complain about how good the standard model is," said Michael Turner, a cosmologist at the University of Chicago. "It's an incomplete model, and yet we can't find flaws in it."

Turner explained that discovering a mass-inducing particle, called the Higgs boson, remains the next big test for the standard model. If discovered, the heavy particle would definitively show that properties like electromagnetism and radioactivity are really different facets of the same force.

"It's the miracle that allows us to combine them together," Turner said of the Higgs, which may be found someday in the collisions of particle accelerators that "rewind" matter to the intense energies of the early universe.

The stubbornness of the standard model has been too much for some physicists, however, leading to new theories that include gravity and work at extremely high energies.

Perhaps the most popularized of them all is string theory, which describes particles as strands of energy vibrating at different "frequencies." To explain the point-like nature of particles, string theory holds that strings are wrapped up in 10 or 11 dimensions—six to seven more than are currently recognized.

The idea is similar to viewing a building from far away. At great distances it looks like a point, but moving closer it appears flat and eventually as a three-dimensional structure. Wrapped within the building are extra dimensions that become smaller and smaller: pipes, and nooks and crannies within the pipes, the spaces between the nooks and crannies and so on.

The inability so far for string theory to prove up to 11 tiny dimensions exist is a hang-up for many, but Jackson thinks some strings could have been stretched across the universe into "superstrings"--ones large enough to detect in space today.

In spite of a present lack of such evidence, Jackson is confident string theory will weather the storm.

"It's hard to imagine that the universe has two different sets of rules for physics. When does it turn one off and the other one on?" Jackson reasoned. "We know there is quantum mechanics and we know there is gravity, so it seems there should be one overall theory. I'm betting my career that it's string theory."

Fermilab cosmologist Scott Dodelson also finds a unified theory logical, but doesn't think a big departure from the standard model is required to conjure one up.

"There are basically two approaches; one is the bottom-up, which is taking data and fixing pieces of a theory to make it more elegant," said Fermilab cosmologist Scott Dodelson. "The other approach is top-down, starting with an elegant theory and working down toward the data. My chips are on the bottom-up people wanting to get down and dirty with data."

In either case, physicists, theorists and cosmologists alike are waiting for high-energy experiments such as the Large Hadron Collider (LHC) in Europe to go online. They hope to find not only the Higgs in the aftermath of colliding particles, but also particle "super-partners" that Dodelson described as the overweight, hidden cousins of more familiar electrons, neutrinos and the like.

"They're too heavy to have been seen so far," Dodelson said, adding that the intense energies LHC-like machines may be enough to get them to "pop out" of colliding particles. If so, the mystery of dark matter (much of the universe's missing mass) could be solved in addition to creating a more formidable standard model of physics.

"We may eventually pierce the 'cloak' of dark matter and detect supersymmetric particles in the lab," Dodelson said. "It would introduce a whole new class of particles and create a new standard model."