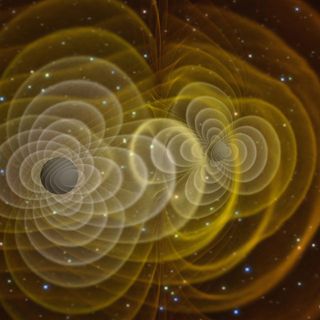 In the deepest depths of space, gravity tugs on matter to form galaxies, stars, black holes and the like. In spite of its infinite reach, however, gravity is the wimpiest of all forces in the universe.

This weakness also makes it the most mysterious, as scientists can't measure it in the laboratory as easily as they can detect its effects on planets and stars. The repulsion between two positively charged protons, for example, is 10^36 times stronger than gravity's pull between them—that's 1 followed by 36 zeros less macho.

Physicists want to squeeze little old gravity into the standard model—the crown-jewel theory of modern physics that explains three other fundamental forces in physics—but none has succeeded. Like a runt at a pool party, gravity just doesn't fit in when using Einstein's theory of relativity, which explains gravity only on large scales

"Gravity is completely different from the other forces described by the standard model," said Mark Jackson, a theoretical physicist at Fermilab in Illinois. "When you do some calculations about small gravitational interactions, you get stupid answers. The math simply doesn't work."

The numbers may not jibe, but physicists have a hunch about gravity's unseen gremlins: Tiny, massless particles called gravitons that emanate gravitational fields.

"We can detect massless particles such as photons just fine, but gravitons elude us because they interact so weakly with matter," said Michael Turner, a cosmologist at the University of Chicago. "We simply don't know how to detect one."

Turner, however, isn't despondent about humanity's quest for gravitons. He thinks we'll eventually ensnare a few of the pesky particles hiding in the shadows of more easily detected particles.

"What it really comes down to is technology," Turner said.

Physicists aren't using mechanical wizardry to discover gravitons just yet, however. Efforts are currently focused on confirming the existence of the Higgs boson, which is the graviton's distant cousin particle responsible for giving matter mass.

Sheldon Glashow, winner of the 1979 Nobel Prize in Physics, once called the Higgs the "toilet" of the standard model of particle physics.

Turner explained that Glashow coined the term because the Higgs performs an essential function: Keeping the standard model functioning, at least in an intellectual way.

"Really, the Higgs is more like a plumber with duct tape, holding the standard model together," Turner said. "A lot of the inelegance of it's all wrapped up in the Higgs."

And rightly so, he noted, because it's required to make the other forces involving mass—such as gravity—make sense.

"At the same time, the Higgs can be frustrating because it doesn't shed much light on gravity," Turner said, assuming that the particle is eventually discovered.

Discovering elusive particles such as the Higgs is something like traveling through time. By using enormous machines to whiz particles close to the speed of light, then smash them together, engineers can mimic the incredible energies present during the early universe.

So early in the universe's existence, particles were too energetic to stick together and form more familiar protons, neutrons and the like.

The Tevatron, Fermilab's 4-mile-circumference (6.3-kilometer) particle accelerator, may have already spotted the Higgs in accelerator data, according to physicists' Web logs. But Turner said the new Large Hadron Collider (LHC) circling 17 miles (27 kilometers) beneath France and Switzerland should clearly confirm it within a few years.

"I think it will be a sigh of relief when the Higgs is discovered," he said. Will particle accelerators, however, eventually pop out a graviton?

Xavier Siemens, a gravitational theorist at the University of Wisconsin Milwaukee, said showing gravity acts like a wave needs to happen first.

"Classically, we can measure waves, and waves are made up of particles," said Siemens, who is also a member of the Laser Interferometer Gravitational-Wave Observatory (LIGO) that looks for wave-like evidence of gravity. By detecting gravitational waves, there would be grounds to suggest gravitons really exist—and begin seeking it out.

"At this point it seems like science fiction. Theoretically, however, we should be able to detect single gravitons," Siemens said. "But how is the big question."