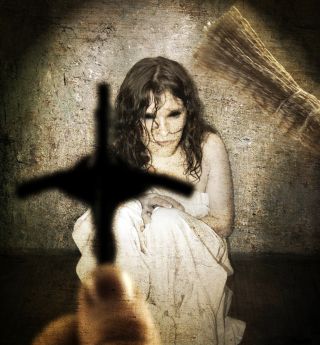 Pope Francis recently expressed his approval of a group of exorcists meeting at the Vatican this week. While exorcisms, in which demonic spirits are driven out of a supposedly possessed person, may seem a dark practice relevant only on TV screens, they have long been recognized by the Catholic Church and several religions.

This week, more than 300 members of the International Association of Exorcists are attending the convention, which is focused on the impact of the occult and Satanism on people today, The Catholic Sun reported.

The IAE was founded in 1990 by Father Gabriele Amorth, exorcist for the diocese of Rome, and was formally recognized by the Vatican this past June. [Spooky! The Top 10 Unexplained Phenomena]

Priests who pursue the ministry of exorcism "manifest the Church's love and acceptance of those who suffer because of the devil's works," Pope Francis wrote in a message to the association's president, Father Francesco Bamonte, Breitbart reported this week. The Holy See's approval of the International Association of Exorcists was "cause for joy not only for the association, but for the whole Church," Bamonte said.

The belief that demons exist and can possess people features in many religions, including Christianity. Exorcisms date back to the time of Jesus, who according to the Bible, "cast out demons."

Exorcism is "a highly unusual ministry for a situation in the human condition, which is quite rare, but it's growing in frequency," said Father Dwight Longenecker, a parish priest at Our Lady the Rosary in Greenville, South Carolina, who is not an exorcist, but supports the practice.

"Exorcism is a little bit like brain surgery in the spiritual realm," Longenecker told Live Science. Real exorcisms aren't quite as dramatic as Hollywood films such as "The Exorcist" would have you believe, but such movies do portray a version of events that actually happen, he said.

Signs that a person may be possessed, though never proven by science, include a great aversion to anything to do with the church, such as holy water or crucifixes; preternatural strength or knowledge; alien voices; and levitation or other paranormal phenomena, Longenecker said. Nevertheless, "we always look for natural explanations first," such as mental illness or addiction problems, he said.

Modern exorcists are normally experienced in both psychology and spiritual matters, and the job requires specialized training, said Longenecker, who writes a blog about the Catholic faith, called "Standing on My Head."

Exorcisms have been known to be harmful in some cases, perhaps due to the involvement of untrained exorcists, as news reports have attested. In 2011, a Virginia man was convicted in the death of his 2-year-old daughter for beating her to death in an attempt to rid her of demons, according to news reports.

The practice of eradicating demons is not unique to the Catholic Church, but it does have a long history with Christianity.

"It's really at the heart of the Church's mission, and it goes back to Jesus himself," said Dan Lord, a writer and director of religious education at the Cathedral of St. John the Baptist in Charleston, South Carolina.

Lord told Live Science he is glad to see the International Association of Exorcists making progress, but this isn't the first time the Church has recognized the group's efforts.

"They had the support of Pope St. John Paul II and Pope Benedict XVI, too, so the approval of the [IAE's] statutes is just the latest step in what has been a fairly steady process," Lord said.

Still, Lord said today's exorcists often feel "undervalued," or suppressed by Catholic priests and bishops who "have jumped on the same materialistic, rationalistic bandwagon as so many others in society," he said.