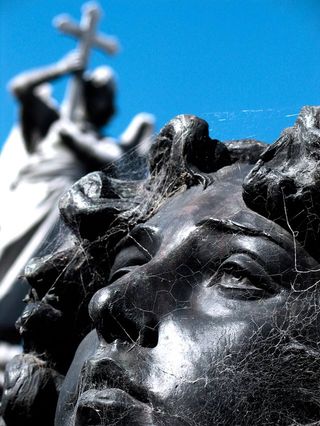 Belief in spirits and demons has been part of humanity for millennia and can lead to violent exorcisms.
(Image: © Gaston M. Charles | Shutterstock)

A Virginia man was convicted earlier this week in the death of a 2-year-old who died during a 2011 exorcism. Eder Guzman-Rodriguez beat his daughter Jocelyn to death in an attempt to rid her of the demon he believed was inside her.

Police summoned to the scene encountered several people holding Bibles outside the home, where Guzman-Rodriguez stated that he had also become possessed by a "bad spirit" when he punched and choked Jocelyn to death. The girl was found on a bed, wrapped in a blanket surrounded by Bibles.

Such beliefs in demonic possession and the violent exorcisms that may follow have a long history and can harm the most innocent among us, children.

Psychology of the exorcism

The belief that demons can possess people is one of the most widely held religious beliefs in the world. The Vatican first issued guidelines on exorcisms in 1614 and revised them in 1999. According to the United States Conference of Catholic Bishops, signs of demonic possession in adults include superhuman strength, spitting, cursing, aversion to holy water, and the ability to speak in unknown languages. [The 10 Biggest Unexplained Phenomena]

Those conducting exorcisms are devoutly religious and truly believe they are doing good through the beating and torture of innocents. Though spirits are said to be able to possess anyone, children are especially likely to be suspected of being possessed. Not only are children often thought to be more corruptible and susceptible to evil influences, but their misbehavior (and even innocent actions) may also seem to be manipulated by dark forces. Parents and caregivers who believe in spiritual possession may look for signs their child is possessed: According to police, Guzman-Rodriguez said he believed his daughter was "gesturing to him as if she wanted to fight."

In other cases, believers assume bad behavior is driven by evil spirits — "the devil made me (or him, or her) do it" is very much alive in many people's minds. The beatings and abuse are not seen as a punishment for the child, because the physical aggression, in the exorcist's mind, is directed at the evil spirit within. The child's body is simply seen as a temporary vessel for the bad spirit. The physical and emotional abuse is seen as an unfortunate but necessary price to pay for the child's spiritual salvation.

As disturbing as this case is, there are many similar historical precedents. A century ago in Ireland, it was not demons but other supernatural, malevolent entities — fairies — that were believed to possess babies and children. Some children were believed by their parents to be changelings, either "false children" or children possessed by an evil spirit that could be driven from the child through abuse and punishment. In her book "The Burning of Bridget Cleary" (about a woman killed by her husband in an attempt to exorcise fairy spirits from her), folklorist Angela Bourke of the National University of Ireland notes that many "accounts can be found in nineteenth-century newspapers and police reports of suspected child-changelings in Ireland being placed on red-hot shovels, drowned, or otherwise mistreated or killed."

Bourke cites an example from 1828 in which a woman named Ann Roche drowned a 4-year-old boy she believed was possessed; like Guzman-Rodriguez, she claimed that she didn't mean to harm or kill the child, just to drive the spirits out of him. Unlike Guzman-Rodriguez, who was sentenced to just under 21 years in prison, Roche was found not guilty and released.

Though belief in fairies has waned in modern times, belief in spiritual possession by demons and other supernatural entities remains very much with us.  In 2003, an autistic 8-year-old boy in Milwaukee was killed during an exorcism by church members who blamed an invading demon for his disability; and in 2005, a young nun in Romania died at the hands of a priest during an exorcism after being bound to a cross, gagged, and left for days without food or water in an effort to expel demons. In 2010, a 14-year-old boy in England was beaten and drowned to death by relatives trying to exorcise an evil spirit from him.

Though belief in spirits and demons has been a part of humanity for millennia, it also has a dark side and can inflict terrible harm on the most innocent among us.

Benjamin Radford is deputy editor of "Skeptical Inquirer" science magazine and author of six books including "Scientific Paranormal Investigation: How to Solve Unexplained Mysteries" and "Hoaxes, Myths, and Manias: Why We Need Critical Thinking." His Web site is www.BenjaminRadford.com.