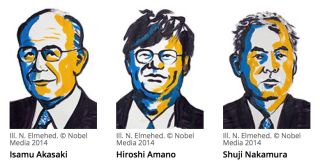 The Nobel Prize in Physics was awarded to a trio of scientists for their invention of blue light-emitting diodes (LEDs).
(Image: © Ill. N. Elmehed. © Nobel Media 2014)

Isamu Akasaki, Hiroshi Amano and Shuji Nakamura have been awarded the Nobel Prize in Physics for their invention of the blue light-emitting diode, the Royal Swedish Academy of Sciences announced today (Oct. 7).

The invention led to a new way to create white light. To get white light, three colors (red, green and blue) are needed. And while the red and green light-emitting diodes (LEDs) have been around for nearly half a century, scientists found the creation of blue light-emitting diodes a challenge. Then in the 1990s, in parallel, the trio created blue light beams from semiconductor materials.

In other light sources, such as incandescent bulbs and halogen lamps, the electric current heats a wire filament, making it glow; but with LEDs, the electricity is transformed directly into light, making such a technology more energy-efficient and longer-lasting. [The Top 10 Inventions that Changed the World]

"The invention of the blue LED is just twenty years old, but it has already contributed to create white light in an entirely new manner to the benefit of us all," according to a statement by the Royal Swedish Academy of Sciences.

Just two of the three Nobel Laureates could be reached today, as of publication, to give them the news of their prestigious award, as Amano was on a plane at the time of the call, said Staffan Normark, permanent secretary of the Royal Swedish Academy of Sciences, during a press briefing. Regarding the two who did receive the call: "Of course they are thrilled of getting this prize, and I think actually they were not prepared for it. They had not been waiting all day and all night for this call. It's a fantastic experience for us to be the first to wake them up or call them in the evening and congratulate them for achieving the Nobel Prize in Physics."

Nakamura spoke to the press audience today over the phone, saying that hearing of his award was "unbelievable" and "amazing."

Akasaki is now at Meijo University, Nagoya, Japan and Nagoya University in Japan; Amano is at Nagoya University; and Nakamura is at the University of California, Santa Barbara. The three scientists will share this year's Nobel Prize award of 8 million Swedish Krona ($1.1 million).

Yesterday, the Nobel Prize in Medicine was awarded to three scientists for their discovery of the brain's "inner GPS," or two types of nerve cells that create spatial maps in the brain. Tomorrow (Oct. 8), Normark will announce the Nobel Prize in Chemistry at 5:45 a.m. EDT (11:45 a.m. Swedish time) at the earliest. You can watch a live webcast on Live Science of the announcement.