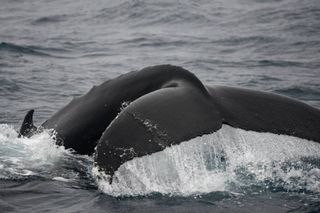 A Humpback whale diving down to feed on the abundant krill.
(Image: © Micheline Jenner – Centre for Whale Research)

When it comes to whaling, the United States has to walk a difficult path, a point reinforced at the International Whaling Commission (IWC)'s biennial meeting held in Slovenia last month. The overwhelming majority of Americans would expect their representatives to be firm in their opposition to any resumption of commercial whaling, yet the U.S. delegation also has the responsibility of representing the interests of its Inuit whalers, whose annual aboriginal subsistence quota for approximately 75 bowhead whales in Alaskan waters has to be approved at the IWC every few years. In addition, Japan —the power-house behind the push for a resumption of commercial whaling — is a key international ally to the United States. To some extent, that is also true of the other whaling nations, Norway, Denmark and Iceland.

Despite those issues, the United States showed great resolve in joining 34 other nations to sign a démarche (a high-level diplomatic protest) against Iceland's expanding commercial whaling, delivered to Reykjavik during the IWC meeting. The démarche targeted Iceland's hunting and trading in products of the endangered fin whale.

The United States has also certified Iceland under the Pelly Amendment to the Fisherman's Protective Act. This law allows the secretary of the U.S. Department of Commerce or the secretary of the U.S. Department of the Interior to determine and certify to the U.S. President that foreign nationals are conducting activities that diminish the effectiveness of international fisheries conservation programs or international programs for endangered or threatened species. Should these secretaries choose to certify a country under the Pelly Amendment, the president has 60 days to decide whether to impose trade sanctions.

The United States first certified Iceland under the Pelly Amendment in 2004 for lethal scientific-research whaling. When Iceland resumed commercial whaling in 2006, then Commerce Secretary Carlos M. Gutierrez used the 2004 certification to pursue diplomatic discussions. Iceland continued whaling and also started to trade on a large scale with Japan, leading to another certification in 2011. The latest certification, on January 31, 2014, focused on the fact that Iceland's trade diminishes the effectiveness of the Convention on International Trade in Endangered Species (CITES) of Wild Fauna and Flora. In all cases, these certifications have led to diplomatic initiatives but no economic sanctions and Iceland has expanded its whaling. [Gray Whales Still Not Recovered From 19th Century Whaling]

It would seem to be time to reassess the effectiveness of this approach, and the United States should give serious consideration to stepping up its game against Icelandic whaling through a more aggressive foreign policy approach. That's consistent with the American role at IWC and in global whale conservation. The United States has played an important role in helping to broaden the work of the IWC to address many pressing "new" threats to whales, including pollution from marine debris, entanglement in nets and climate change. This expanding role for the IWC often goes unnoticed because of all the publicity around the "whaling-wars," but from a conservation and animal welfare perspective, it is of great importance.

Were the United States to advance a stronger hand in the suppression of what remains of the world's commercial whaling, it would also put itself in a better position to defend aboriginal subsistence whaling by native Alaskan peoples. The bowhead hunting quota is based on claims of heritage and nutritional need, something that Denmark, Iceland, Norway and Japan cannot make with any degree of persuasion or justice in a modern world.