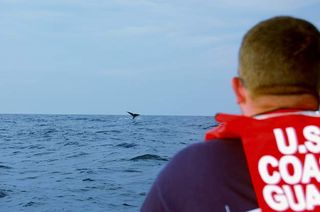 Officials hope to rescue a rare right whale entangled in rope and fishing gear off the Florida coast.

Severe weather has the rescue team stuck in port today, however.

The whale was first spotted Saturday morning off Georgia. It is being tracked by a telemetry buoy that rescuers affixed to the roughly 75-foot rope trailing the beast. At last report it was about 25 miles east of Daytona Beach.

Right whales are the most critically endangered in the Atlantic, with only about 300 in existence, scientists say. This is not the first one to be snared. A similar rescue of an entangled right whale was successful last December.

The problem is growing. A recent study found that huge swaths of the Pacific Ocean are loaded with discarded fishing nets that entangle marine mammals, turtles and sea birds.

Right whales spend summers feeding off the coast of Canada and New England, then travel south during the winter to calving and nursery areas.

"We've tracked the whale's movement since Saturday and it continues to head south, which is typical behavior for right whales at this time of year," said Barb Zoodsma a marine mammal biologist and right whale recovery program coordinator for NOAA Fisheries Service Southeast.

Given the whale's speed and the weather forecast, it could take days or weeks to get it disentangled, officials said.