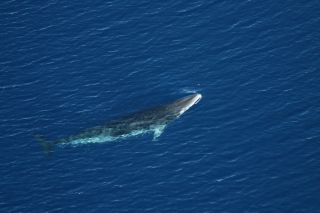 A minke whale. This species is the smallest of baleen whales. They eat krill (a shrimplike crustacean) through their sievelike mouths.
(Image: © Meike Scheidat)

Japan has been ordered to halt its whaling program temporarily in Antarctica, after the U.N.'s International Court of Justice ruled today (March 31) the practice is not for scientific purposes, as Japan has previously argued.

The court's 12-4 ruling requires Japan to stop issuing whaling permits and licenses until changes are made to the program, reported USA Today. "The evidence does not establish that the program's design and implementation are reasonable in relation to achieving its stated objectives," Presiding Judge Peter Tomka of Slovakia said, reading the court's decision.

Australia brought the case before the International Court of Justice in 2010, arguing that Japan's whaling program in Antarctica was masking commercial interests. Since the controversial program began in 2005, Japan has caught approximately 3,600 minke whales, though the scientific gains have been questionable, reported BBC News.