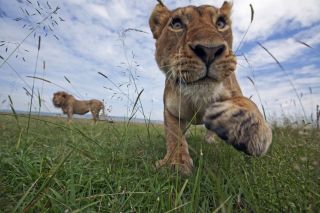 Wildlife populations have been cut in half over the past four decades, a new report shows.

The number of mammals, birds, reptiles, amphibians and fish on Earth dropped by 52 percent from 1970 to 2010, according to the World Wildlife Fund's newly released Living Planet Report.

The findings are based on the Living Planet Index, which is a database maintained by the Zoological Society of London to track more than 10,000 representative populations of vertebrates (animals with a backbone). [Image Gallery: Bringing Extinct Animals Back to Life]

The main threats to wildlife across the world are habitat loss and exploitation (through hunting and fishing) — and sometimes a combination of both. The WWF report points to the example of the forest elephant (Loxodonta africana cyclotis) in West and Central Africa. Because of habitat loss, forest elephants had been confined to an area that accounted for just 6 to 7 percent of their historic range by 1984. Later, the elephant population size shrank by more than 60 percent between 2002 and 2011, mostly due to poaching for ivory, the report found.

Humans are consuming more resources — such as trees, food and fossil fuels — than the planet can sustainably accommodate, essentially exhausting the ecological goods of one-and-a-half Earths, according to the report.

"We're gradually destroying our planet's ability to support our way of life," Carter Roberts, president and CEO of WWF, said in a statement. "But we already have the knowledge and tools to avoid the worst predictions. We all live on a finite planet and it's time we started acting within those limits."

The BBC reported that some critics were skeptical of the results and think the dataset may be inherently biased, slightly exaggerating the nature of the problem.

"Those [species] in decline are perhaps of greater interest, and hence more likely to be monitored, than those that are stable or increasing," Stephen Buckland, of the National Centre for Statistical Ecology in the United Kingdom, told BBC News. "For practical reasons, populations that are more impacted by man are more easily monitored. ... So is there a decline? Certainly. Are animal numbers around 52 percent lower than 40 years ago? Probably not."