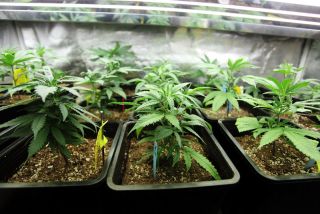 Legalization is bringing money and innovation into the cannabis business in Colorado.
(Image: © Peter Kim, Shutterstock)

A healthy 21-year-old man had a heart attack after smoking marijuana, and the doctors who treated him believe the drug is what caused his heart attack, according to a new report of this case.

In fact, experts say that there have been other cases of cardiovascular problems related to smoking pot, and that growing evidence suggests there may be a link between the drug and heart problems.

The young man at the center of the new case was a regular marijuana and cigarette smoker, according to the case report. He arrived at the emergency department in Wales and said that he had a sharp pain on the left side of his chest that had lasted for 30 minutes. He said the pain started after he played soccer.

A month prior to this, the man had come to the same department with similar symptoms, also after a game of soccer. However, at that time the doctors at the University Hospital of Wales, in Cardiff, thought the pain was caused by an injury to a muscle. [16 Oddest Medical Case Reports]

But this time around, the doctors found that the man's cholesterol and triglyceride levels were higher than they should have been, according to the report published in the September issue of The Journal of Emergency Medicine.

"Although our patient was a cigarette smoker and had elevated lipid levels, cannabis use was identified as the most significant precipitant of his acute coronary syndrome,” (ACS) the researchers wrote in the study. (Acute coronary syndrome is a term used to describe symptoms related to the obstruction of the coronary arteries, which feed the heart muscle itself, which may occur as a result of a heart attack.)

Marijuana is not considered to be a common risk factor for heart attacks, but there is evidence suggesting the drug may trigger heart attacks in rare cases, the researchers wrote. They pointed to a 2001 study published in the journal Circulation, where researchers concluded that smoking marijuana increased people's risk of a heart attack 4.8 times in the first hour after smoking it, compared with their baseline risk.

The doctors noted that the 21-year-old man had previously used cocaine, which is a well-recognized trigger of ACS, but his use of this drug was too far in the past to be the cause of his heart attack, they wrote.

There have been other reports of heart attacks in young patients who had recently used marijuana, the researchers wrote, citing six such reports in patients ages 19 to 36.

It is not clear how marijuana may contribute to heart problems, the researchers wrote.

Experts not involved in the new report said the case adds to the body of literature on marijuana use and cardiovascular problems.

“It is difficult to establish causality [between heart attack and marijuana use] with just a case report,” said Dr. Sripal Bangalore, an associate professor and interventional cardiologist at the Department of Medicine of NYU Langone Medical Center.

“Nevertheless, the case report adds to the growing body of evidence about the potential deleterious effects of marijuana use on the heart,” Bangalore said, calling this phenomenon "the pot heart."

Why are cases popping up now?

The man's elevated lipids and smoking may have contributed to his heart attack, but it remains very rare for a 21-year-old to have a heart attack, without a strong family history of heart attacks, Bangalore told Live Science. It cannot be determined whether all three factors — elevated lipids, smoking cigarettes and marijuana — played a role, he added.

"Considering the current state of knowledge in the field of cannabis-related disorders, I think the researchers’ conclusions are relevant,” said Émilie Jouanjus, a medical faculty member at the Centre Hospitalier Universitaire de Toulouse in France, who was also not involved in the report. The case is consistent with many other cases reported in the scientific literature, she said.

In her own study published in April in the Journal of the American Heart Association, Jouanjus and her colleagues examined data on health complications following marijuana use gathered between 2006 and 2010 by the French Addictovigilance Network. The researchers found that among the 2,000 cases of reported complications, 35 cases involved heart problems. And among those were 20 people who had heart attacks, including nine who died.

Cases of heart attacks associated with marijuana use are increasingly recognized, the researchers wrote in the study. [Marijuana vs. Alcohol: Which Is Really Worse for Your Health?]

Jouanjus agreed with the researchers’ statement, saying that "there was a rise in the number of cases of cannabis-related cardiovascular complications reported in the literature, starting about 20 years ago."

But the first reported cases date back further — they were described in the late 1960s, she told Live Science.

Bangalore said the reason why such cases are being increasingly recognized today is likely that doctors are more aware now of the potential deleterious effects of marijuana use. "As the saying goes, the eyes don’t see what the mind doesn’t know."